Mystery Question
Can you identify anyone in this photograph?
[Please answer by clicking on the Comments tab]
Creator
Marshall Davidson, Photographer
Media Type
Image
Item Type
Digital images
Description
A picture of dairy cattle on display at the Brooklin Spring Fair on June 4, 2011.
Notes
The Brooklin Spring Fair was initiated by the South Ontario County Agricultural Association, a group of farmers and businessmen in the Township of Whitby that also operated the Oshawa Fair. The first fair, lasting one day, was held at Grass Park on 24 May 1911. By 1915, the Brooklin Spring Fair became independent of the SOCAA. 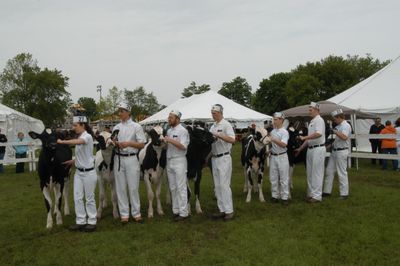