Creator
Marjorie Ruddy, Photographer
Media Type
Image
Item Type
Negatives
Description
A black and white large format negative of machinery inside the Whitby Community Arena.
Notes
The Whitby Community Arena was built between 1953 and 1954 on the site of the Burns and Taylor arena. It was located on the block bound by Brock, Ontario, Green, and Gilbert Streets. The Community Arena was official opened on 29 September 1954. It operated until 1972, when it was condemned under provincial building standards and demolished.

Marjorie Georgina Ruddy (1908-1980) was a prominent Whitby photographer and the only commercial photographer in Whitby during the 1930s and 1940s. Marjorie was the official photographer for the Whitby Police Department starting in the 1930s and as a result took many photographs of car accidents, fingerprints and crime scenes. (Station Gallery. Whitby Through the Lens Photographs by Marjorie G. Ruddy, 1935-1948. Whitby: Station Gallery, 2010.)
Date of Original
26 February 1955
Dimensions
Width: 4 in
Height: 3 in 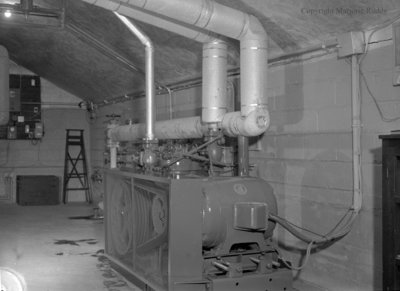