Mystery Question
Can you identify anyone in this photograph?
[Please answer by clicking on the Comments tab]
Creator
Marjorie Ruddy, Photographer
Media Type
Image
Item Type
Negatives
Description
A black and white negative of an unidentified woman and Judge Robert Ruddy sitting in front of a piano.
Notes
Robert Ruddy was born in Brock Township, Ontario County on April 30, 1861 and was educated in Uxbridge and Port Perry. He was called to the Bar in 1889 and practised law in Millbrook until 1909 when he went to Peterborough. He came to Whitby as Ontario County Judge in 1917 and served until he retired on December 1, 1936. He died at Whitby on November 9, 1940 and is buried at St. John's Anglican Cemetery, Port Whitby. Mr. Ruddy was Marjorie Ruddy's father.

Marjorie Georgina Ruddy (1908-1980) was a prominent Whitby photographer and the only commercial photographer in Whitby during the 1930s and 1940s. Marjorie was the official photographer for the Whitby Police Department starting in the 1930s and as a result took many photographs of car accidents, fingerprints and crime scenes. (Station Gallery. Whitby Through the Lens Photographs by Marjorie G. Ruddy, 1935-1948. Whitby: Station Gallery, 2010.)
Date of Original
26 June 1936
Dimensions
Width: 1.5 in
Height: 1.5 in 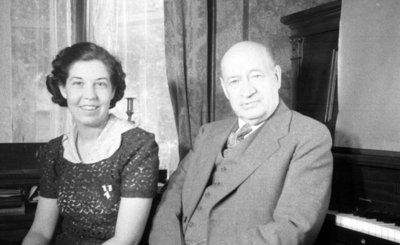