Creator
Wren Blair, Author
Media Type
Image
Text
Item Type
Correspondence
Description
Letter from Wren Blair to Mr. & Mrs. Norm Mould thanking them for their support of the Whitby Dunlops and informing them of the team's progress prior to the 1958 World Ice Hockey Championships in Oslo.
Notes
The original Whitby Dunlops were founded in 1954 when the 1952-53 Oshawa Generals were disbanded after their arena burned down. Some of the players, along with coach and manager, Wren Blair, formed the Oshawa Truckers for the 1953-54 season.

In 1954, the Oshawa Truckers relocated to Whitby and were temporarily renamed the Whitby Seniors. The team played out of the Whitby Community Arena and was soon sponsored by the Dunlop Rubber Company. The newly renamed Whitby Dunlops, started their first year as a Senior B team. After winning the league they moved up to the OHA Senior A League.

The Dunlops won the Allan Cup in both 1957 and 1958 and won a gold medal at the World Ice Hockey Championships in 1958 at Oslo, Norway.

The Whitby Dunlops folded after 1960. They were revived in 2004 by a group of local businessmen and entered the Ontario Hockey Association's Eastern Ontario Senior Hockey League for the 2004–2005 season. The Whitby Dunlops joined Major League Hockey, the top tier for senior men's hockey in Ontario, in 2009.
Date of Original
8 Aug 1957
Dimensions
Width: 8
Height: 10 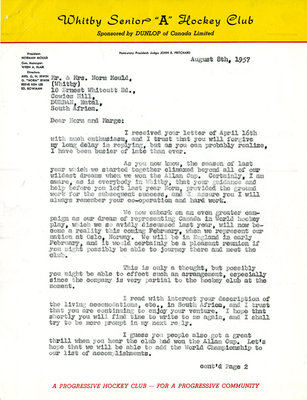