Mary Two-Axe Eariey today regains her status as a Mohawk Indian almost 50 years after she lost it by marrying a non-Indian.

The restoration is the result of recent amendments to the Indian Act.

Earley, 73, who has been battling Ottawa since 1968 over the issue, says: "After all these years, I'll be legally entitled to live on the reserve, to own property, die and be buried with my own people."

Amendments to the Indian Act given royal assent last week eliminated discrimination against Indian women who marry non-Indians. The Ministry of Indian Affairs says that 18,000 women and their children are entitled to have their status restored under the new amendments.

Media Type
Text
Item Type
Clippings
Description
This is a newspaper clipping from July 5, 1985 which tells us that Mary Two-Axe Earley regained her status as a Mohawk after nearly 50 years of having lost it by marrying a “non-Indian”. This is a result of an amendment to the Indian Rights Act which “eliminated discrimination against Indian women who marry non-Indians”. 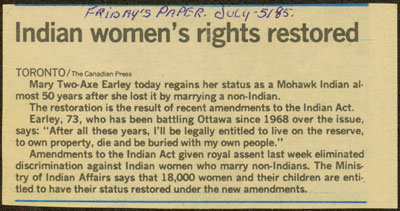