“On Friday, March 20, 1965 the Burners of the Sulphide Works were extinguished, thus snuffing out the 60 year old 'jewel of Nichols Chemical Company Crown.'” , writes Inez Credicott in her essay .


According to the Tweed Women's Institute book, in 1964 the plant felt a loss when the Faraday Uranium Mine was closed as a result of a decreasing market. After running at a loss for a few months the Sulphide plant was finally shutdown on March 20th, 1965. “The company made every effort to find continuing employment for the Sulphide personnel,” reads the Women's Institute's book.


Inez on the other hand describes the shutdown on a more personal level. She details how five people in her family alone were affected by the shutdown of the Sulphide plant. Her husband Ken, her father-in-law Earl, her two brothers-in-law Frank and Ross, as well as her own brother Tom. Her husband Ken was fortunate to be transferred to a Nichols Chemical Company warehouse in Toronto, where he continued to work until his retirement after working for 35 years with the company.


Within months after the plant shut down, the buildings on the property owned by the company were torn down as well, including the various housing units built for employees. 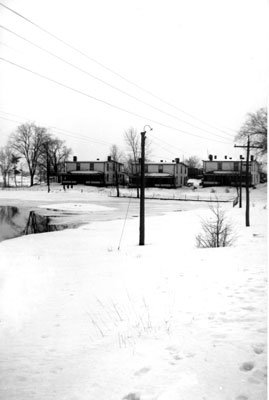