Creator
Nelson, G. R., Photographer
Media Type
Image
Item Type
Photographs
Description
Glossy aerial photograph of the Queen Alexandra Sanatorium buildings and grounds with the Thames River on the left.
Notes
The Queen Alexandra Sanatorium, a facility for the treatment of people suffering from tuberculosis, opened its doors on April 5, 1910. In April, 1949 it was renamed The Beck Memorial Sanatorium. It closed September 6, 1972.

The map shows the site of the Queen Alexandra Sanatorium. It was built on a high bluff overlooking the Thames River, in an area that was, at that time, outside the city of London. This site is now within the city at 600 Sanatorium Road and is occupied by CPRI (Child and Parent Resource Institute, formerly Children's Psychiatric Research Institute).

A guess has been made that this photograph was taken ca. 1940. 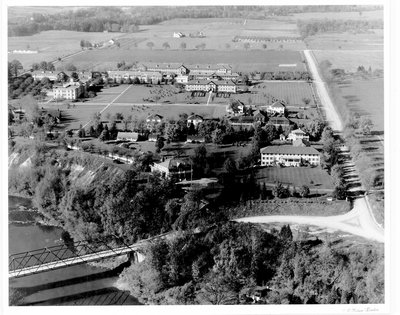