Media Type
Image
Item Type
Photographs
Description
Black and white aerial photograph of the south east corner of Wellington and Dundas Streets, showing Hotel London on the corner, and to the east of it, the Bell Telephone Building and Burroughes Furniture Company. A portion of the London Armouries, just east of Burroughes Furniture Company, can be seen in the left background.
Notes
Work began on Hotel London October 23, 1926. Built in Renaissance Revival style by the London Realty Company Limited, it officially opened July 25, 1927. The bar closed for the last time at 1 a.m. Sunday March 5, 1972 and demolition began March 27, 1972. It is now the site of the City Centre building. (Source: "Fragments From The Forks: London Ontario's Legacy" by Daniel J. Brock; edited by Catherine B. McEwen)

The Bell Telephone Building was built in 1930 and occupied under lease by the Bell Telephone Company for ten years. This building was later known as the Victory Building. During the war it was the home of the R.C.A.F. recruiting centre. The Wartime Prices and Trade Board and Unemployment Insurance Commission also had offices there. It was purchased in 1947 by the Northern Life Assurance Company of Canada. At the time of purchase, the building was being used by the Income Tax Department and other Government offices, as well as by legal firms, agencies and branch insurance offices. This building became the head office of Northern Life Assurance Company, at which time it became known as the Northern Life Building. It was demolished in late 1978. (Source: LFP January 15, 1947 and October 21, 1978)

F. C. Burroughes Furniture Company Limited opened September 8, 1932. (Source: "Fragments From The Forks: London Ontario's Legacy" by Daniel J. Brock; edited by Catherine B. McEwen) The Burroughes Furniture Company moved to the Wellington Square Mall in 1960. The city leased most of this building as a city hall annex from early 1961 until February, 1971. The building was demolished in the summer of 1972. (Source: LFP July 20, 1972) 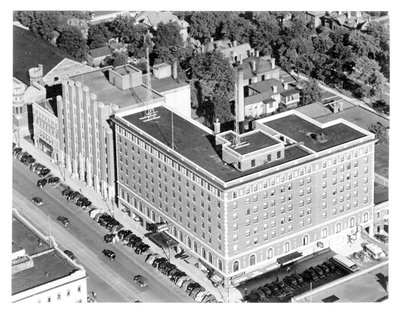