Creator
Hilda Vanstone, Photographer
Media Type
Image
Item Type
Photographs
Description
A black and white print of an original photograph of the brick building at 122 Carling Street which housed the Farmer's Advocate. The street view is taken looking north towards the front of the building, with a lady pedestrian striding by wearing a long dark coat and a wide brimmed light coloured hat. A bicycle is parked by the hydro pole to the right of the curved entrance. The three large ground floor windows are also curved on top. A sign in the first window reads: "Farmer's Advocate. The William Weld Co." Stretching across above two of the second floor windows is another more prominent Farmer's Advocate sign.
Notes
The original photograph was taken ca. 1935 by Hilda Vanstone(nee Curnoe)who worked at the Farmer's Advocate for many years. A copy of the original was donated by Glen Curnoe, her nephew.

The Farmer's Advocate was a monthly agricultural journal which was published between 1866 and 1965 in London, Ontario. It was started by William Weld, a farmer and later carried on by his sons and grandsons.
It was a publication for farmers and provided them with a source of agricultural news, a place to advertise and a forum for sharing ideas about current agricultural issues.
The location for 122 Carling Street is given on the map. The original building, built in 1854 was used for Josiah Blackburn's newspaper, "The London Free Press" for over a decade. An illustration of the original building can be seen on page 138 of the book: "Downtown London: Layers of Time." The first floor then was very different with more of a storefront design. Between 1871 and 1920 the building was occupied by the Queen's Hotel. The Farmer's Advocate made it their headquarters from 1921 until they finished publishing in 1965. Since 1974 it has been the home of the Marienbad Restaurant.
Date of Original
ca. 1935
Dimensions
Width: 20.2 cm
Height: 12.6 cm 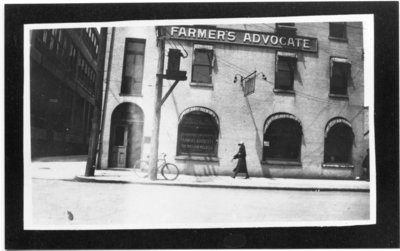