Under cool, fall skies, the new boat launching ramp at Mackey was officially opened on Friday, October 23. Present for the occasion was Len Hopkins, MP, Morris Hamilton, MPP, County Warden, Roselma Sinclair and neighbouring reeves and their spouses as well as Reeve of the Townships of Head, Clara and Maria and her Council.

Len Hopkins in cutting the ribbon expressed his pleasure at being present for the opening of the ramp and remarked that several such ramps had now been installed in the County and looked forward to there being yet another at Deux Rivieres in the not too distant future.

Reeve Loretta Boissonneault outlined the history of the ramp, commenting on the various steps involved with Ontario Hydro, Department of Highways and the Department of Public Works before the project could be realized.

Congratulatory greetings were extended from the Provincial Government by Morris Hamilton, and from Renfrew County by the Warden, Roselma Sinclair. Following the opening, a dinner party was held at the Deux Rivieres Hotel; the group then moved on to the Township Hall and Community Centre at Stonecliffe where dancing to the Country Ramblers was enjoyed. A draw for a comforter at the dance was won by Paul Elliott of Lands and Forests, Stonecliffe.
Media Type
Text
Item Type
Clippings
Date of Original
October 23, 1970
Subject(s)
Boat Launch
Collection
Loretta Boissonneault
Language of Item
English
Geographic Coverage
Donor
Loretta Boissonneault
Copyright Statement
Protected by copyright: Uses other than research or private study require the permission of the rightsholder(s). Responsibility for obtaining permissions and for any use rests exclusively with the user.
Copyright Date
1970
Copyright Holder Contact Information
North Renfrew Times
Mail: P.O. Box 310, Deep River, Ontario K0J 1P0, Phone: 613.584.4161, Fax: 613.584.1062 Email:NRT@magma.ca
Website: http://www.magma.ca/~drcanrt/ 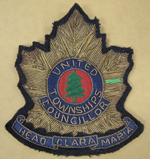