Home (Advanced) → What's New → Details
A Day on the hunt, in the townships

A Day on the hunt, in the townships


The alarm clock shrilled into my troubled sleep at 5.25 am. Ah yes, it was the first day of the hunt and I had premised to trek the woods with the family. I was to officially record the "kill" on film.

Half asleep I dug into closets and boxes to find suitable bush garb. Comfortable and colourful. The thought of being mistaken for a moose was real and frightening.

Into the kitchen. Husband's toast looked revolting. My stomach refused to consider anything but coffee. The result of too much hunt-camp hospitality the night before. Returning to the covers seemed the most sensible line of action. Yet I had promised...

Snow danced down as we trekked off down the trail in silence. It was now 7.15 am.

Now the bush road was becoming more rugged. Dodge the branches. Get both legs over the fallen tree. This could be an endurance test.

Now we were at the lake. But there was no rest here. "Push on" said the guide "and be quiet".

At 8.30am we were posted in a woods water bed. Our watch was at the edge of the marsh, on a point so that we could see all of the L-shaped bog.

A blue jay called. A raven croaked by. The squirrels and chickadees chattered. In fits the snow beat down.

At first we whispered to each other. Huddled on evergreen boughs piled on a rotten log, feet dodging water wells semi-hidden in the grasses, we told ourselves we were warm and comfortable. It was not so. Soon the cold and wet drove daughter to light a fire. Ah, this was campfire fun. The black smoke from the birch bark stung our eyes, but the instant warmth made it all worthwhile. Now we were busy hauling twigs to keep the smudge alive. Bravely, noisily we felled swamp-rotten trees and slipping and sliding into the ever present water, we kept the fire going.

The sooty unbuttered toast munched at 10.30am (M'God we had been two hours in the swamp) with a chunk of cheese relieved the gnawing pangs of hunger. We would survive.

Still no sign of moose. We had been assured we would have ample warning of their arrival because they make a lot of noise in the bush.

Briefly the sun came out about 11.30 am. It warmed our spirits and bodies. We continued to doze by the fire, hunched on our logs, sheltered from the biting wind by the grasses and bulrushes.

A wee mole startled us as it flitted out to inspect our camp fire and soggy setting, then scurried back home. A soaring hawk scrutinized us from the dull sky above.

A crackling in the bush. The noise brought daughter to her feet in a flash, hand on gun. A low voice called. It was only guide returning for our planned mid-day rendez-vous.

The marsh-watch phase of our day was over. We were now all going moose tracking. To be able to move, after a four hour sit, was a welcome thought. The track-trail moved up and down, but hugged the swamp. Fresh moose dirt was inspected for sliminess. Even fingered. This is serious business.

"Hey, Guide, look at this track" I shouted, thrilled with my discovery. It brought only a scowl and a reminder, "No talking".

We were now to circle the lake, guide on the high bluff, daughter and I hugging the shore, but always within shouting distance. Certainly not seeing distance. The bush ahead was a tangled mess of greens and greys and browns and blacks.

A foot slithered sideways as I jumped a stream and I sogged up to my knee in gunk. A doubled- gloved hand, set out for protection as I fell, became sodden and sore. It's part of the hunt, I kept trying to reassure myself.

"I wish he wouldn't leave us alone," moaned daughter as blackened chicos turned into bears, reared ready to kill. We were afraid.

"Stop," I whispered. Surely hidden ahead was the antlers of a moose at rest. It was the roots of a fallen pine.

The shoreline turned into marsh. There was no avoiding it. We must plough thorough. Now we were thoroughly soaked.

The swamp sucked at each boot and reluctantly gave up. We had gone so far. To go back was as bad as to go ahead. My heart hammered, and I had visions of coming to exit time in the swamp.

Two ducks rose and inspected our predicament. Guide was safe and dry on high land. He knew what he was doing. Daughter could not go on. Her too-loose boots, now completely water-filled, weighted a ton. Perched on a six-inch grass heap she took off and emptied the boots, balancing like some giant water-bird. With superhuman effort we flapped and flopped on. We had no choice.

Guide sat calmly peeling an egg as we landed exhausted at his feet on shore. Daughter now with boots in hand. Sodden sox sticking out like snowshoes.

The final test was to cross the beaver dam. An ominous depth of water on one side, and on the other a maze of branches, twigs and sparking waterfalls. We chose to fall into the latter, but the camera, hidden deep in the packsack, remained dry.

Somehow, the six mile jaunt wasn't so bad even for someone who usually walks from car door to office. Guide said he would have made it in half the time without us. But our moral support was surely worth the time sacrifice.

The few hunters we met on the trek out reported the same as us. Signs, but no moose. Feathery bay's breath vines, mosses, multi- shaped leaves joined memories as souvenirs of my day in the bush.

By 3.00pm, the magic of a warm bath was turning warped and whitened feet to pink tones of life. I had survived. I could now go on to our dinner date at the Adelard Hunt Camp.

"AD" flung open the front door of the old loghouse by the railway tracks at Adelard to welcome us. Adolphus' "AD" -Miron of the hotel Cornwall in Cornwall is the last of the original crew of what he proudly calls "The Millionaires' Club. He hadn't missed the hunt in Bissett's for the past 40 years. Today he hunted all morning, rested in the afternoon in preparation for a hound hunt across the lake tomorrow.

"You have to pace yourself he said as he filled our glasses from the array of liquors almost filling the table. "After all, I am 85", "and tonight we observe a minute silence before the dinner, in memory of former members".


So we heard about the old days. AD's mind is clear. Memory sharp.

The logs sizzle in the large, ancient , cracked-and-patched box stove. A tub of water hums on top. Bath warm.

My gaze takes in the rambling, rough room, the beds lining the wall, the slanted staircase lead¬ing to one giant bedroom upstairs, the poker table, the girly pictures on the wall. This is the sleep and relaxing part of the camp. Nearby in the cookhouse, Mamie, the local resident hired to cook for the week's hunt, is weaving her magic.

Adelard was once a railway stop. Night trains would deposit hunters at the door. Old railway building and a home became "The Adelard Hunt Camp" - a home for Cornwall hunters. A new sleeproom addition and cookhouse have revitalized the place.

Mamie and her dish-drying husband join us in the log sleep- camp for a pre-dinner drink. She tells of her struggles to cook the turkey that day. The wood stove balked. A hurried jaunt to her electric stove in Stonecliffe was made. Then the power went off....

Ten hungry hunters bustled in. Dropping guns, coats and equipment. Noisy, back-slapping, teasing, joking crew. "AD" the King, surveys all and makes instructions, as he pours himself another shot of vodka. There has been No Luck in the hunt that day.

The hunters don't see Mamie. They look for one thing - food. "How's the turkey?" they holler and one well-rounded character rubs his belly in anticipation. It takes a special breed to be a Hunt Camp Cook. The conversation is raunchy. It doesn't bother Mamie. Wine glass in hand, her twinkle-eyes through it all.

"Five minutes" she says as she heads for the cookhouse.

A bespectacled senior type with suspenders holding up the hunt trousers passes a piece of delicious cheese from the end of the hunting knife.

We decide it is time to join Mamie. Some five or six hunters linger on for one more relaxing drink.

The enormous table, laden with cheese, spanish onion rings, lemon pies, apple squares and wine, occupies and good half of the cookhouse. The stove is huddled near the door and across form it a huge blue agate pot serves as a dishpan.

A hungry horde pours in. Hot plates are grabbed from the flapped-open warming closet of the stove. Each hunter loads his plate with fluffy mashed potatoes, peas and carrots, string beans and gravy, all of which have been warming gently on the stove. Then it's over to the counter for turkey and dressing.

Most hunters also make themselves a pile of blackened bread on the top of the wood stove. They call it toast. Mamie quietly moves about, picking up dishes, washing them, her husband dries and sometimes a hunter pitches in to help.

We learn the boys also have kegged bear and a pitcherfull usually graces the breakfast table. Maybe a hangover cure.

The food is delicious. Some hunters have brought pickled peppers with them. It seems a good idea to have a bite. Then the howling and laughter as they almost choke us.

The bantering is going on, the teasing, the off-colour stories. All around us food is being shovelled in and gulped down. It reminds us of the dinner table in the cub camp, as if no food had been eaten for a week. Mamie spoils her boys with homemade pies at noontime as well. She eats little herself and keeps herself trim. 'You get sick of looking at it" she says.

The men pile back to their sleeping-living quarters. Some to drink and play cards. Some to fall into the bunks exhausted. Mamie cleans up and goes home. She'll be back by 5.30 next morning.

We decide to call it a day too. After all, it's the time of the hunt in the townships. A fun time. And who knows what tomorrow will bring... 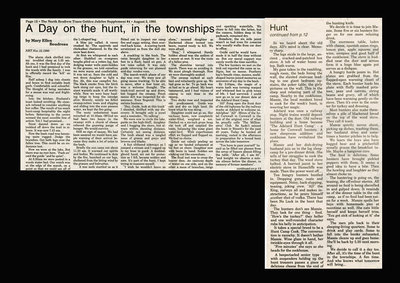