"I decided lo run for the office of reeve because so many people from each of the communities of Deux Rivieres, Bissetts, Stonecliffe and Mackey asked me to," says Mrs. Loretta Boissoneault, reeve of the townships of Head, Clara and Maria.

The first woman reeve in the history of the townships is no stranger to public office. In fact, she has been almost continuously active in some public office or community effort all her life. After a career teaching school in Mattawa, Penetang, Kapuskasing and Cochrane, Mrs. Boissoneault went to Bonfield to apply her teaching talents there.

There she met her husband Andre who ran a trucking business. The family set up a general store in Deux Rivieres which it has operated for 25 years. In addition to her duties for the municipalities, Mrs Boissoneault is also in charge of the local post office which her family has been running for the past 19 years.

While her job as reeve is time-consuming she finds it rewarding.

Mr. and Mrs Boissoneault have eight children, most of whom are married and living in North Bay. Seventeen-year-old Dianne is a student at a convent at Sturgeon Falls.

Mrs. Boissoneault's activities have been many and varied. For instance, she campaigned for war bond drives for which she received an award for outstanding service. She has been district representative for the Canadian Institute for the Blind. She was instrumental in the formation of the first bilingual separate school in the area and served as school board treasurer for eight years until the school site was moved to Mattawa.

Besides organizing local drives for the Red Cross she was president of the Catholic Family Circle in Deux Rivieres.

The local choir owes her a debt for having organized it and served as its organist for the past 20 years. The energetic lady reeve held various offices in the Lacordaire Association including the post of president for 18 years. As well as taking an active part in the local Catholic Women's League, she is diocesan office clerk for the Lacordaire Association, a position she had held the past three years.

Other activities include participation in the North Renfrew Liberal Association.

This is her 13th year on the township council. For 12 years previously she served as a councillor but won the election for reeve against incumbent Art Yates with a comfortable majority.

For Mrs. Boissoneault, wife, mother, postmistress, community leader and township reeve it's a busy life, but beyond this she has no higher ambitions.

When asked what she hoped to achieve while reeve, she replies, "My greatest goal is to see our county debt cleared up during my two-year term of office."

When she took office, the debt was $7,000. Clearing it up would be a major achievement for this is a sparsely-populated area.

But judging from her performance the community can expect that she will give it an honest effort. 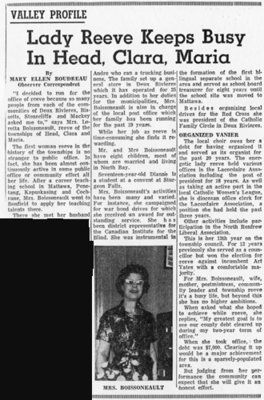