On August 16, 1987, Max F. Borutski, a former Conservation Officer and resident of Round Lake Centre, passed away after a lengthy illness.

Max was born June 18, 1908, in Hagarty Township near Wilno, and took to the outdoor life early in his career. He began one of his first jobs with Quebec Forestry in Angliers, Quebec. From 1939 until 1942 he worked in the mines at Kirkland Lake.

For the next seven years, Max worked for the Ontario Department of Lands and Forests fighting forest fires and maintaining the telephone lines in the Whitney and Achray areas of Algonquin Provincial Park.

In 1949 he was sent to the Lands and Forests base at Stonecliffe — on the Ottawa River between Deep River and Mattawa — to work on the phone lines, but was later given the position of Conservation Officer.

Max became a permanent employee with Lands and Forests on January 18, 1950, and remained at Stonecliffe as a Conservation Officer until his retirement in 1973.

During his stay at Stonecliffe, Max patrolled Algonquin Provincial Park by dog sled, snowshoes, and birch bark canoe. He also constructed a number of cabins in the park to be used as a stopover while on patrol.

Max was a true jack of-all trades. He was an expert carpenter, dog team driver, axeman, cook, woodsman, and a man of many other talents that few people ever saw. Max always took his job seriously and performed his assigned duties in a professional manner.

This was demonstrated to me on more than one occasion, but especially the one time I asked Max to show me the trail into Lost Coin Lake.

As it was winter time, we managed to take some old timber trails by snowmobile until we located the trail to the cabin on the lake. The cabin was another 100 yards away but the trail was all grown in with thick brush.

Max got out his special, favorite axe and began limbing the trees so we could get the snowmobiles to the lake. 1 snowshoed ahead to break trail. On the way back I could hear the familiar clinging noise of his axe as Max chopped his way through the thick forest.

As I got closer the "cling" became a "clunk". Max looked down at his favorite axe which now had a piece missing from its razor-sharp edge, and perplexedly said: "Now who'd ever believe there'd be a nail in a tree way out here!"

Max was an example of a true Ranger, an example of a goneby era, but his achievements are legendary. He is survived by his wife Mary and son Kenny who live at Round Lake Centre. 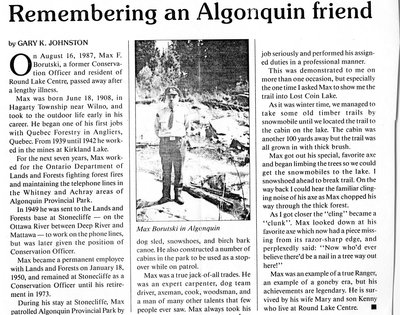