Media Type
Text
Item Type
Pamphlets
Description
This booklet provides the form of prayer and thanksgiving used by Anglican Churches during the Crimean War; its contents are specific to that conflict. It was printed on page 162 of The Work of Our Hands by Sharon Jaeger, and was provided by Linda Guest. It contains two services, intended to be read on September 30th and March 21st.

The first pages notes that this service is meant to be held "In all Churches and Chapels in England and Wales, and in the Town of Berwick-upon-Tweed". Berwick-upon-Tweed is a small border town roughly the size of Paris (12,000) whose status has been famously murky for the better part of a millennium. The town is situated near the border of Scotland and England, and for several centuries was not formally considered a part of either country. As a result, many proclamations and declarations in this period mention the town of Berwick-upon-Tweed alongside the major dominions of Great Britain such as England and Wales.
Notes
A number of pages are missing from the first section, covering the September 30th service.
Publisher
Queen's Printer (George Edward Eyre and William Spottiswoode)
Place of Publication
London
Date of Publication
1855
Subject(s)
Prayer
Religious services
War
Local identifier
2003.159.1.1
Language of Item
English
Donor
Provided by Linda Guest
Copyright Statement
Copyright status unknown. Responsibility for determining the copyright status and any use rests exclusively with the user.
Contact
County of Brant Public Library
Email
WWW address
http://www.brantlibrary.ca/
Agency street/mail address
County of Brant Public Library (Paris Branch)
12 William Street
Paris, ON
N3L 1K7 | @brantlibrary 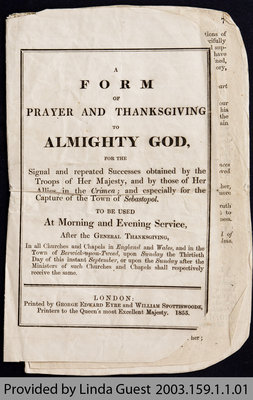