Hiram Capron's Businesses
Main Menu → Previous Page → Next Page
Gypsum mining
Pages
IntroductionBlast furnaceGypsum miningLand sales and leasesFarmingReferences
The gypsum mines are one of the most central and important elements to the history of Paris. Gypsum is the main ingredient required in making plaster of Paris, and it was because of the town’s large gypsum beds that Capron decided to name the town after it (Warner, 463).

There are major gypsum deposits on the banks of the Grand River – especially in South Dumfries and the east side of the Grand. This means that most of the prime gypsum areas are either in or bordering Paris (Warner, 152). The earliest settlers to the area were most attracted to the gypsum (Smith 4, 8), and they built up gypsum mines as one of the first industries.

How do you get at gypsum? It can be mined by digging tunnels into the ground or quarried by digging straight down from the top, depending on how the deep the gypsum is (Eckel, 29). In Paris, the gypsum was shallow and very near the surface (Smith, 20), so the early operations were quarries (Warner, 659) or shallow mines.

In Paris, gypsum was used for both of these. Fertilizer was one of the most important early uses, since the land had so many farmers; some types of land will produce much better plants with gypsum fertilizer (Sawyer), and Ontario land improved immensely from Paris gypsum (Warner 475). But to make it ready for fertilization, it needed to be ground using a water-powered gypsum mill in order to produce a powder (Warner, 474). Plaster of Paris was primarily useful as a cement-plaster or wall-plaster (Eckel, 33), or for statue casts (Warner, 475). It also needed to be transformed into a very fine powder, which required grinding the gypsum several times over (Eckel, 34). 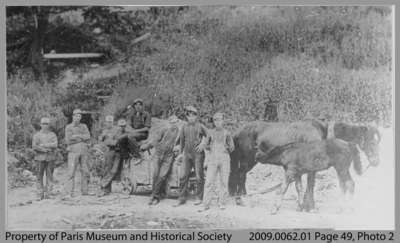 Workers outside gypsum (plaster) mine near Green Lane Details 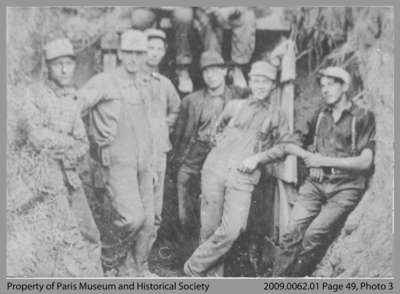