Media Type
Image
Item Type
Photographs
Description
This photograph depicts three of the Bryce brothers at the time of the golden wedding anniversary of George Bryce, Sr. in the 1890s. His two brothers who sailed to North America, and later settled in the United States, came to visit him. The man on the right is most likely George Bryce (see comments). The photograph and background information were provided by Linda Guest.

George Bryce was a blacksmith and wagonmaker who had the J. Duncan house built in 1853 by John Randall Ellis. His son, Dr. George Bryce, was born in Mount Pleasant in 1844; he was a founder of United College of Manitoba University. Another son, Dr. Peter Bryce, was a medical doctor in Toronto who headed the first Provincial Health Department, and later was the Indian Department of Health Inspector. His daughter was the wife of Dr. Duncan Marquis.
Date of Original
[ca. 1890s]
Dimensions
Width: 9.25 px
Height: 4.25 px 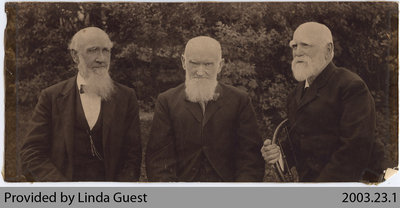