Creator
Bryce, Robert H., Depicted
Media Type
Image
Item Types
Photographs
Postcards
Description
This postcard depicts Robert H. Bryce, the son of George Bryce of Mount Pleasant. He settled in Winnipeg. This postcard was provided by Linda Guest.
Notes
The postcard was printed on Azo photo paper, which dates it to the early 20th century - this style of Azo card dates roughly 1904 - 1918, although the photograph may have been taken earlier. It does not appear to have been mailed, because the stamp window is uncovered.
Inscriptions
The reverse of the postcard reads:

A later inscription was added, reading: 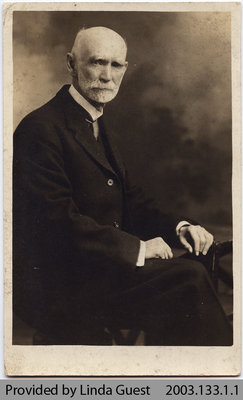