Media Type
Text
Item Type
Documents
Description
In this 1913 contract, Sarah Speed agrees to repay her transportation fare from England to Penmans Limited. At the time, Penmans solicited workers from across Canada and in England, and paid for their immigration costs. The cost was treated as a loan and was expected to be repaid from the employee's salary. This contract notes the repayment schedule. In this case, the transportation cost was $60.70.
Date of Publication
13 Aug 1913
Subject(s)
Emigration & immigration
Employees
Immigrants
Knitting
Paris, Ontario
Immigrants - Canada
Penmans Limited
Local identifier
1999.8037.03
Collection
Penmans Employee Collection
Language of Item
English
Geographic Coverage
Copyright Statement
Copyright status unknown. Responsibility for determining the copyright status and any use rests exclusively with the user.
Recommended Citation
Sarah Speed Immigration Fare Repayment Agreement, 1913, Penmans Employee Collection, 1999.8037.03, Paris Museum and Historical Society
Terms of Use
The information and images provided are for personal research only and are not to be used for commercial purposes. Use of this information should include the credit “Paris Museum and Historical Society.”
Contact
Paris Museum and Historical Society
Email
WWW address
http://www.theparismuseum.com
Agency street/mail address

In consideration of having received from PENMANS LIMITED Sixty 70/100 Dollars for transportation from England. to Paris, Ontario, I hereby agree to faithfully serve said firm as a mill operative upon such terms as may be arranged from time to time between the Company and myself, and I further agree to pay back to PENMANS LIMITED the amount advanced for my passage as above given at the rate of 50 ¢ per week while I am earning less than $6.00 per week, and at the rate of $1.00 per week when earning $6.00 or more per week until the debt is discharged in full, it being further agreed that the unpaid balance shall at all times constitute a first lien against any wages then coming to me; and in case I should at any time cease in the employ of the Company the then unpaid balance will immediately become due. 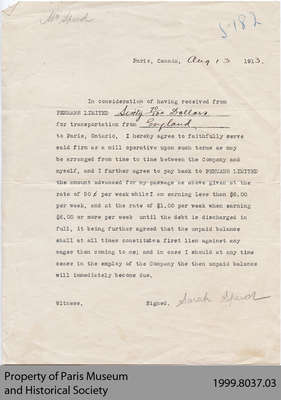