Media Type
Text
Image
Item Type
Documents
Description
This document records the official incorporation of the Grand River Electrical Power Company of Paris, signed on December 10th 1898.
Notes
This item was digitized on November 14th, 2009, during a Digitization Days event at the Paris Branch of the County of Brant Public Library.

Under The Ontario Companies Act


VICTORIA, by the Grace of God of the United Kingdom of Great Britain and Ireland
QUEEN, Defender of the Faith &c &c &c
To all to whom these Presents shall come-
GREETING

In Testimony whereof We have caused these Our Letters to be made Patent and the Great
Seal of Our Province of Ontario
to be hereunto affixed
Witness : THE HONOURABLE SIR OLIVER MOWAT Knight Grand Cross of Our Most Distinguished Order of Saint
Michael and Saint George Member of Our Privy Council for Canada and LIEUTENANT-GOVERNOR of Our PROVINCE OF
ONTARIO 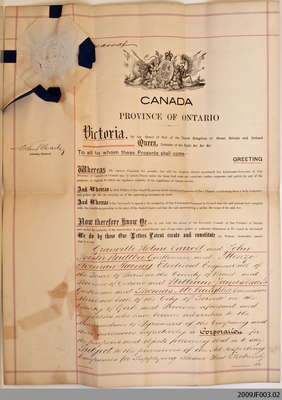 Closeup of coat of arms
Groups of Related Records