Creators
Unknown, Photographer
West, William
, Depicted
West, Robert
, Depicted
Media Type
Image
Item Type
Photographs
Description
This photograph depicts William "Wally" West (1818 - 1912), self-proclaimed Bard of the Nith and Grand Commodore of the Nith Navigation Co., his son Robert in front of their home on the Ayr Road. They were among the most eccentric of Parisians in the 19th and early 20th centuries. The Nith Navigation Co. rented boats and took passengers out on the Nith River.

Robert's entertainer's cart, containing a phonograph and magic lantern (a type of early slide projector), is attached to his bicycle on the left. The text on it reads:

More information about the Wests can be found in chapter 18 of volume I of At the Forks of the Grand, linked to on the right. 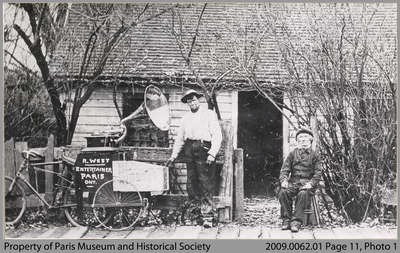