Creators
Unknown, Photographer
West, William
, Depicted
Vanstone, Don
, Editor
Media Type
Image
Item Type
Photographs
Description
This photograph depicts William "Wally" West (1818 - 1912), self-proclaimed Bard of the Nith and Grand Commodore of the Nith Navigation Co., with his nautical telescope. He and his son Robert were among the most eccentric of Parisians in the 19th and early 20th centuries.

More information about the Wests can be found in chapter 18 of volume I of At the Forks of the Grand, linked to on the right.

This image was printed on the thirty-second page of photographs in At the Forks of the Grand: Volume II by D. A. Smith.
Inscriptions
(On original matting)

William West (1818 - 1912), Bard of the Nith and Grand River Navigation Fleet. Note his telescope, which he used to spot reefs and hostile ships.

This project has received financial assistance from the Department of the Secretary of State of Canada to mark the Bicentennial of Ontario. 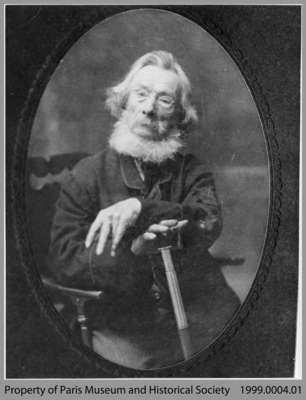 At the Forks of the Grand Vol. II