Creators
Holme, John, Author
Holme, William
, Author
Media Type
Text
Image
Item Type
Documents
Description
This 1824 indenture documents the sale from John Holme to his brother William of land in what was then the Township of Dumfries, and now Paris. This land comprised lots 29, 30, 31 and 32, which makes up most of what is today Paris north of Dundas Street. John received £800 for this sale.

John had bought this land from William Dickson. William Holme would later sell it in 1834 to Thomas Clark and Samuel Street, who would sell it in turn to Hiram Capron.
Date of Original
4 May 1824
Subject(s)
Contracts
Land
Paris, Ontario
Holme, William
Local identifier
2007.0158.05
Collection
Hiram Capron Collection
Language of Item
English
Geographic Coverage
Copyright Statement
Copyright status unknown. Responsibility for determining the copyright status and any use rests exclusively with the user.
Recommended Citation
Land Indenture Between William and John Holme, 1824, Hiram Capron Collection, 2007.0158.05, Paris Museum and Historical Society
Terms of Use
The information and images provided are for personal research only and are not to be used for commercial purposes. Use of this information should include the credit “Paris Museum and Historical Society.”
Contact
Paris Museum and Historical Society
Email
WWW address
http://www.theparismuseum.com
Agency street/mail address

Deed
of
Bargain and Sale from
John Holme
to
William Holme

A. Memorial of the within Deed is recorded in the Office of Register for the County of Wentworth and Halton the Twenty Fourth of August one Thousand Eight hundred and Twenty Four at [illegible] O Clock [illegible] Lib C fo 117 [Mem?] No. 161
James Durand
Register

[Note: The following is written vertically in the left margin]

Signed, Sealed and elivered
In the presence of 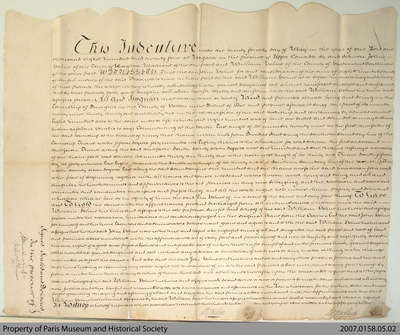