The division of waterpower among these parties is:

This indenture is cited on page 88 of volume I of At the Forks of the Grand.
Notes
The original document is written with ink on parchment. Some of the ink has faded significantly, harming legibility; the contrast has been enhanced in this online edition in order to improve legibility. As a result, colour reproduction is not authentic.
Date of Original
2 May 1849
Subject(s)
Contracts
Water power
Indenture
Capron, Hiram
Hamilton, Norman
Finlayson, Hugh
Local identifier
1999.3136.01
Collection
Hiram Capron Collection
Language of Item
English
Geographic Coverage
Copyright Statement
Copyright status unknown. Responsibility for determining the copyright status and any use rests exclusively with the user.
Recommended Citation
Indenture of Water Rights on William Street Dam, 1849, Hiram Capron Collection, 1999.3136.01, Paris Museum and Historical Society
Terms of Use
The information and images provided are for personal research only and are not to be used for commercial purposes. Use of this information should include the credit “Paris Museum and Historical Society.”
Contact
Paris Museum and Historical Society
Email
WWW address
http://www.theparismuseum.com
Agency street/mail address

It is understod by the within [????d] parties that Mr Capron is to be at liberty to erect a wall with centre of the [???l] [illegible] on the East side of Grand River Street Provided that in so doing the total space for the [illegible] of the water shall [illegible] be less than thirty picks. It so also understood that the term common high water within used is [illegible] to catered to [?ishels] 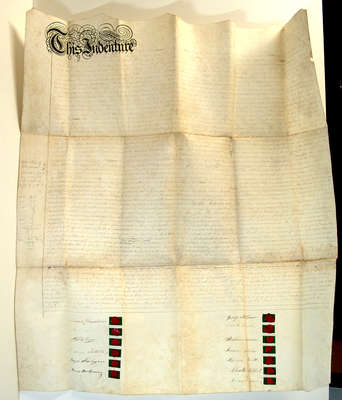 Detail of text on back
Groups of Related Records