Creators
Brant, Joseph, Author
Jones, Augustus
, Author
Media Type
Text
Image
Item Type
Documents
Description
This land indenture, signed March 1st, 1805, documents the Six Nations’ grant of land to Augustus Jones. He was given in total 1200 acres, located north of Dundas Street and east of the Grand River. The lease was granted for “Nine hundred and Ninety nine years,” and the only payment requested was “one Pepper Corn,” delivered January 1st of every year if “lawfully demanded.” Augustus Jones was married to one of Joseph Brant’s daughters, and the support of their children is cited as the reason for this grant.

This copy of the lease belonged at one point to William Holme, but later made its way into Hiram Capron’s hands. Underneath Holme’s inscription, Capron has marked “A curiosity worth keeping” and dated his acquisition at July 11th, 1869.

This indenture is referenced on pages 5 and 6 of At the Forks of the Grand, Volume I.
Notes
The exact date of this copy is not clear. While the date given is March 1st, 1805, it is not clear if this copy is contemporary or if it had been created for William Holme at a much later date. It is more likely a later copy, as it is missing signatures. It cannot have been created later than July 11th, 1869, at which time Hiram Capron took possession of it.
Date of Original
1 Mar. 1805
Subject(s)
Land
Land grants
Brant, Joseph, 1742-1807
Six Nations
Dundas Street, Ont.
Capron, Hiram
Jones, Augustus
Holme, William
Grand River
Local identifier
1999.0403.01
Collection
Hiram Capron Collection
Language of Item
English
Geographic Coverage
Copyright Statement
Copyright status unknown. Responsibility for determining the copyright status and any use rests exclusively with the user.
Recommended Citation
Land Indenture between Augustus Jones and Six Nations, 1805, Hiram Capron Collection, 1999.0403.01, Paris Museum and Historical Society
Terms of Use
Terms of use: The information and images provided are for personal research only and are not to be used for commercial purposes. Use of this information should include the credit “Paris Museum and Historical Society.”
Contact
Paris Museum and Historical Society
Email
WWW address
http://www.theparismuseum.com
Agency street/mail address

This Indenture made the first day of March in the year of our Lord one thousand eight hundred and five Between the Six Nations of Indians residing on the Grand River in the Province of Upper Canada by Joseph Brant, Principal Chief and agent for the said Six Nations duly authorized by them, and their behalf to execute Leases of such parts and parcels of their Lands as the said Joseph Brant shall be thought fit to be Leased ([illegible] part) and Augustus Jones of the Township of Saltfleet District of Niagara, and Province of Upper Canada, [illegible] of the other part. Witneseth that when as on the twenty fifth day of October, in the year of our Lord one thousand Seven hundred and eighty four, at the City of Quebec upon the representation of The said Joseph Brant on the behalf of the said Six Nations of Indians to the late General Frederick Haldimand then Governor, and Commander in Chief, of the Province of Quebec and Territories depending there on [illegible] the Commander in Chief in consideration of the early attachment to the Kings Cause manifests by the Mohawk Indians, and of the [illegible] of their Settlement, which they thereby Sustained by an Instrument in writing, by him Subscribedwith his Seal at arms annexed, and [Simco?] on the twentieth day of march in the year of our Lord one thousand Seven hundred and Ninety gives [illegible] [enreq?sc????en] the Secretary office of the said Province of Upper Canada, Liber A. Folio 8 - was Pleased to Grant appropriate and assign to them, and such others of the Six Nations as wished to Settle in that quarter Six miles [illegible] from each side of the River Ouse or Grand River, out the mouth thereof and extending in that Proportion to the Lead of the said River to be enjoyed by them and their
Posterity by forever -

forever Reference thereunto being had and whereas the the said Augustus Jones has from time to time, here to fore render services to the said Six Nations of Indians and for their benefits and advantages as expended of his own property and having been long Connected with them by marriage with a Daughter of one of our Principal Chiefs by whom he has several Children, for all of whom we wish to provide; the Six Nations of Indians by the said Joseph Brant in Consideration of the regard for him and for the reasons aforesaid, and the rents, Covenants, and agreements, herein after mention reserved and Contained on the part and behalf of the said Augustus Jones to be paid done and performed, Have Granted, Demised, leased, let and to farm let unto him the said Augustus Jones his heirs Executors Administrators, and a feigns all that certain tract or parcel of lands being part and parcel of the herein before mentioned Territory Granted by the said Commander in Chief to the said Six Nations, [B???ed] and Bounded as follows that day, that is Commencing at a Post, on the Easterly sides of the Grand River where the lower line of Block Number one extends a crop the said River from the Forks of the said river and running from hence North Seventy Seven degrees East two hundered and thirty chains the [illegible] South thirteen degrees East Sixty Chains exclusive of one Chain for Dundass Street, thence South Seventy Seven degrees West to the center of the aforesaid Grand River thence up the said Center of the said River to the Place of beginning Containing [illegible] hundred acres of land more or less. To Have and to hold the said parcel or tract of lands herein before maintained unto [illegible] the said Augustus Jones his Heirs, Executors, Administratives and assigns from the day of the date of the presents for and [illegible] the [illegible] and [len???] Nine hundred and Ninety nine years from the [illegible] and fully to be Completed and ended [yielding?] and paying therefor yearly and every

every year on the first day January, unto the said Six Nations or their agent for the time being, one Pepper Copps, if the same shall be lawfully demanded, and the said Six Nations, by the said Joseph Brant, their agent, as aforesaid, do Covenant, Grant, and agree, to and with the said Augustus Jones his Heirs, Executives, Administrators, and assigns paying the rent herein before reserved, and contained, that he, and they Shall and may, Peacefully and quietly, have, hold, occupy, possess and enjoy the said tract; or parcel of land, here in before last mentioned, and Granted, and Demised together with all the Privileges, and appurtenances, thereunto in any [w???] belonging and appertaining for and decreeing the said term of Nine hundred and Ninety nine years, herein before Granted without the lawful let, [illegible], trouble, molestation, eviction, or expulsion, or intervention of or by them, or of or by any of her Person or Persons, [illegible] Claiming, or to Claim, by from or under them, or any, or either of them, or by, or with them, or any of their Privity absent Consent or Procurement. In Witness where of the parties have hereinto interchangeably set their hands and seals the day and year herein before written.
Jos. Brant - S (circled)
Signed {
Augustus Jones - S (circled)

Signed Sealed and
delivered in the Presence of
Caleb Reynolds
[illegible] 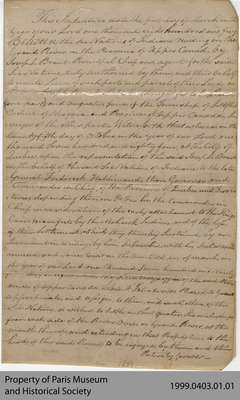