Home (Advanced) → What's New → Details
At the Forks of the Grand: Volume I
Description
Comments (0)

Creators
Smith, Donald A., Author
Nichol, Robert
, Illustrator
Pickell, John P.
, Author
Media Type
Text
Image
Item Type
Books
Description
This local history book traces the history of Paris from the initial exploration of the region, its development and foundation under Hiram Capron, and its economic and social development following its incorporation until 1918.

Donald A. Smith is the principal author. Chapter 20, on Newspapers and Editors, was written by John P. Pickell, then editor of the Paris Star.

At the Forks of the Grand was originally published in 1956, and was republished in 1980. The copy digitized is the 1956 first edition.

Many of the photographs contained in the original book have been scanned from the original copies and are available as a part of this collection. Click on the "At the Forks of the Grand Vol. I" link to the right to view them.

In addition, the documents listed below, which are cited in the book's text, are included in this collection. Check the right to see the links to them.


The following author biography is taken from the 1980 second printing:

Mr. Smith taught history in Paris High School from 1929 until a year or so after being appointed as principal.

In 1941, as secretary of the Library Board, he offered to write a historical sketch of that institution to help in marking the centennial of its founding.

While doing research on the project, he was surprised by how little was known about the early history of Paris and the lack of interest in it. Also, for the first time, he became interested in local history.

In 1946, because of the newly-found interest and the fact that local history was made part of the course of study for Canadian history, he began to research the early days of Paris.

Then because he was no longer teaching Canadian history and had no hope of having his work published, he lost interest.

However, in 1955 he was asked by the Paris Centennial Committee to complete the history as a contribution towards celebrating the incorporation of Paris as a town in 1956. As a result, he wrote five more chapters and gathered pictures.

The Book was first published in 1956.

Mr. Smith is now retired and living in Paris. 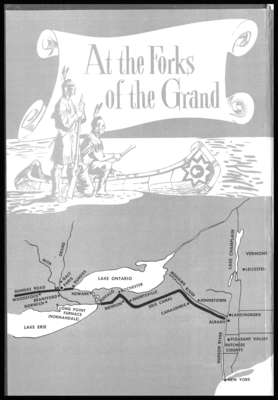