DEATH OF HIRAM CAPRON, Esq.
_____
Few men have taken a more prominent art in the affairs of Paris and the surrounding country than the gentleman whose name heads this article, and when his death was announced in the evening of the 10th inst., a pall seemed to settle upon the town, and a sense of irreparable loss was felt on every land. "King Capron" is dead," was the expression from every tongue, and many were the words of regret, recollections of favors and kindnesses received at the generous ands of the deceased. His sickness had extended through a good portion of the summer, but the summons came almost suddenly, at last, and many of his intimate friends were not aware of his serious illness till his death was announced.

The funeral on the 12th inst., was one of the most numerously attended that ever wended its silent and solemn way through our streets. Beside the relatives, the procession was composed of the richest and the poorest of the town, whose presence in such unseasonable weather manifested the deep regard entertained for the deceased. The funeral services were conducted by Dr. Townley, and as the impressive ceremony closed, and the earth fell upon the coffin, many realized with a pang that they had seen the last on earth of one whose form and features had been familiar since they first knew Paris, and whose generosity had been their stay in many a trial. We have gleaned a few particulars of his history from one who knew him well, and has for many years enjoyed his friendship.

Mr. Capron was born in Vermont in 1796. He left his father's residence, as most young men of that day did, with little to help himself, but a strong constitution, an enterprising spirit and an industrious hands. He remained for a short time in New York State, and crossing over to Canada, settled in Normandale, near Long Point. Here he carried on a blast furnace successfully, in company with the late J. Van Norman and others, and subsequently removed, in 1827, to what was then named "The Forks," so called from the confluence of two streams there. Here he bought one thousand acres of land, and settled down to farming remaining a farmer upon the same ground to the time of his death. In his youth he said to have been a man of strong nerve and unswerving will, stopping at no obstacles, but pushing on through every difficulty, and conquering all opposition. The location he chose for his future life and labors indicated foresight as well as courage. What is now the flourishing town of Paris, was not at that time a promising point to ordinary observers, but he saw in Smith's Creek and the Grand River latent power that most draw around "The Forks," at some day, a manufacturing and busy town; then there was nothing but a little plaster mill and three log houses. As the place grew, and needed a more definite title, he fixed upon "Paris." It was objected that this was a rather presumptuous name, considering that it bore no resemblance to its great namesake. He explained that that had nothing to do with it. The great capital was not in his mind, but "plaster Paris"-which was then, as now, being found in large quantities on the river banks in the vicinity. Thus he was the father of the town and gave it its name. He added a grist mill  to the plaster mill, on the site now occupied by the mills of Mr. Whitlaw, and by his encouragement to settlers, the newly named settlement soon became a village, and when in 1849 it was incorporated, he was its first Reave, having previously served as District Councilor, and since many times in the Municipal Council. He was never ambitious of power, or desirous of becoming conspicuous, and often refused honors and offices that would have made him prominent. Farming was his chosen occupation, and his wealth has accumulated by devotion to his work and the increased value of lands from the settlement and improvement. The deceased was twice married, his first wife, Mary Delong, Norwichville. dying, Feb. 28, 1852, and leaving a family of five daughters and two sons, who survive their father. In 1854 Mr. Capron married the relict of the late Capt. J.R.D. Burnett, U.S.A., who is still living.

In politics he was always a Reformer, but his retiring disposition kept him from taking that precedence which his influence could have secured, and which his experience would have so well qualified him for. he was consistent and thorough in his party attachments, and never deserted the ranks in which he had chosen to serve, or deviated from a consistent adherence to what he deemed the better party of the day.

It is singular that the three brothers have died within three months. He remarked to a friend not long since, "I shall die in September." And so it has proved. The month was scarcely entered when his prediction was fulfilled. The autumn of his life closed with the beginning of the autumn of the year, and we venture to say, the falling leaves never dropped upon the grave of one so widely known, who had fewer enemies, or more who remembered the absent with greater gratitude. He has gone from among us and we shall long miss his well known carriage and familiar step, which seemed almost a part of our town itself. "The landmarks are being removed." The early settlers are gliding silently into the great future, and leaving our country and its vast interests to their sons. May we improve according to the age in which we live, and the opportunities by which we are surrounded.

[pasted in clipping below the third column]

At his residence, Glen William, near Paris, Ont., Jan'y 30th, William Hiram Capron, second son of the late Hiram Capron, Esq., in the 31st year of his age.

The funeral took place yesterday to the New Cemetery and was one of the largest we have seen here lately. About 70 conveyances, many of them double, followed the remains to the tomb. The funeral services were conducted by Dr. Townley, in the Church and at the grave.

Mystery Question
Which newspaper(s) are these articles from?
[Please answer by clicking on the Comments tab]
Media Type
Text
Image
Item Type
Clippings
Description
A newspaper obituary documenting Hiram Capron’s death, which appears to be contemporary, and an obituary of his son William Hiram Capron. The two men died three years apart from each other. Both articles appear to be local. The reverse contains unrelated articles about Napoleon III, Count D’Orsay, and Byron, as well as a joke.
Notes
Hiram Capron died in 1872; his son died in 1875. The articles contained here appear to come from both years.

The article about Napoleon III makes reference to his will, which dates it and the other articles from the same newspaper as having been written in 1873 or later.

The article on Hiram Capron's death is referenced on pages 33 and 36, which attributes it to The Paris Star. 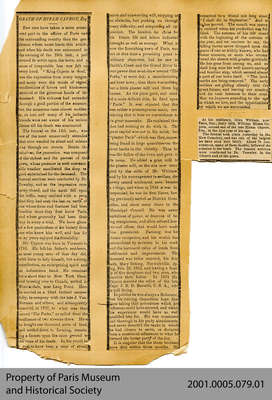