Creators
Walsh, Francis S., Author
Capron, Hiram
, Recipient
Media Type
Text
Image
Item Type
Documents
Description
This 1829 statement confirms Hiram Capron’s oath of allegiance to the King, a provincial requirement for foreign-born residents in order to obtain the full rights of a natural born British subject. An earlier statement, from 1822, also exists and is included in this collection.
Date of Original
12 Sep. 1829
Subject(s)
Citizenship
Oaths
Capron, Hiram
Local identifier
1999.0366.01
Collection
Hiram Capron Collection
Language of Item
English
Geographic Coverage
Copyright Statement
Copyright status unknown. Responsibility for determining the copyright status and any use rests exclusively with the user.
Recommended Citation
Statement of Hiram Capron’s Oath of Allegiance, 1829, Hiram Capron Collection, 1999.0366.01, Paris Museum and Historical Society
Terms of Use
The information and images provided are for personal research only and are not to be used for commercial purposes. Use of this information should include the credit “Paris Museum and Historical Society.”
Contact
Paris Museum and Historical Society
Email
WWW address
http://www.theparismuseum.com
Agency street/mail address

County of Norfolk in the
Province of Upper Canada
township of Charlotteville Court. I Francis S Walsh Register for the County of Norfolk aforesaid do hereby certify that Hiram Capron of the township of Dumfries in the District of Gore in the said Province Gentleman on this twelfth day of September in the of our lord one thousand Eight hundred and twenty nine, before me at Charlotteville aforesaid hath taken and Subscribed the oath of allegiance as prescribed by an act of the Legislature of this Province, entitled "An Act to secure and confer certain inhabitants of this Province the civil and political rights of Natural born British subjects. Entry Book No. 1
Page 1
No. 7
Francis S Walsh
Register 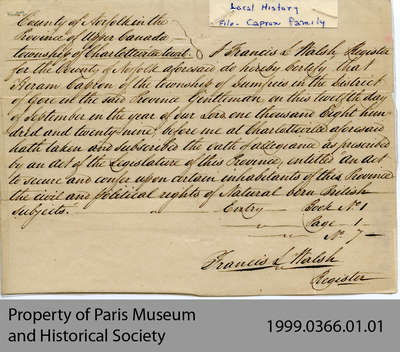