Mystery Question
Which family members are depicted in this photo along with Capron?
[Please answer by clicking on the Comments tab]
Capron, Hiram
, Depicted
Media Type
Image
Item Types
Photographs
Drawings
Description
This photograph depicts Hiram Capron’s stone house in its original form. Begun 1845, it took three years to complete and was finished by 1848. It later belonged to John Penman, who remodeled and expanded it significantly in 1887. As remodeled by Penman, it is now known as “Penmarvian.” A slide included in the same envelope as the original photograph contains an etching of the house under Capron, and is also included.

This photograph depicts Capron and some of his family members in front of the house’s door and in its window.

This photograph was printed on page 25 of Volume I of At the Forks of the Grand.
Notes
Because this photograph depicts the house in complete form, it cannot have been taken before 1848.
Inscriptions
Mr. Capron's residence
Later - Penmarvian

Hiram Capron and members of his family in front of his Stone House, built in 1848, and later re-modelled into Penmarvian.

THE STONE HOUSE. Paris, Ont.
House of Hiram Capron. Founder of the Town of Paris Ont. in 1829. The stone house was built by him in 1848. Stone brought uncut from quarries in Ancaster - building took 3 years.
Mr Capron came to Canada in 1821.

This house was very much changed by John Penman both inside and out and is now called Penmarvian. 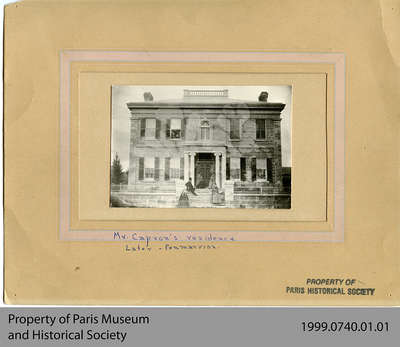