Creators
Smoke, Franklin, Author
George Foster and Sons
, Recipient
Media Type
Text
Item Type
Documents
Description
This item is a typed letter sent from Franklin Smoke, a Paris lawyer, to George Foster and Sons dated January 23, 1903. Mr. Smoke writes about the recent financial difficulties being had by Mr. J.H. Adams in Paris, who owes some money to George Foster. After explaining some of Mr. Adam's troubles, becoming ill with pneumonia for months and resulting losses to his very young business, and debts to his creditors of between $400 and $500, he explains that a compromise needs to be reached on payments to George Foster. This compromise will ensure that Mr. Adams can both pay off his 20 creditors while also paying off the balance owed to them at $20 per month. In addition to a 50 cent charge owed by Mr. Adams, Mr. Smoke hopes that a proper arrangement can be made on his behalf as soon as possible.
Notes
George Foster and Sons was a Wholesale Grocer located at 143 Colborne Street on the historic South Side of Brantford.
Date of Original
23 January, 1903
Subject(s)
Correspondence
Debt
Lawyers
Businesses
Debtor and creditor
Wholesale trade
Letter
Personal Name(s)
Smoke, Franklin ; Adams, J.H.
Corporate Name(s)
George Foster and Sons
Local identifier
985.86.113.005.001
Collection
Brant Museum and Archives Collection
Language of Item
English
Geographic Coverage
Copyright Statement
Copyright status unknown. Responsibility for determining the copyright status and any use rests exclusively with the user.
Recommended Citation
Letter to George Foster and Sons from Franklin Smoke, January 23, 1903. Brant Museum and Archives Collection. Item No. 985.86.113.005.001.
Contact
Brant Museum and Archives Collection
Email
WWW address
http://www.brantmuseums.ca
Agency street/mail address
57 Charlotte St.
Brantford, ON N3T 2W6
(519)752-2483
Full Text

Mr. J.H. Adams of this town, against whom you have a small a/c,

is in financial difficulties. His trouble came originally from the fact

that he started business two years ago with practically no capital. Then

last winter he was laid up for several months with pneumonia, which meant

of course a severe loss to the business, although Mr. Adams looked after

-fined to his bed with lung trouble but hopes to be out again in a few days.

now in the bailiff's hands. His total liabilities are between $400 and

$500. If matters are pressed there will be nothing left for the creditors

Mr. Adams is loath to ask for a compromise, but I am satisfied it is the

best thing for him to do for all parties concerned. If this can be arrang-

-ed, I think Mr. Adams can arrange with a personal friend to relieve him in

connection with the judgments which are already against him, and thus en-

-promise - provided of course a satisfactory compromise can be effected.

being divided among probably 20 creditors. I wont suggest 50c on the dol-

-lar as a basis. I really think this is the best he can do. He says he

thinks he could pay about $20 a month, and, if the creditors will agree,

50c is paid? The claims being small the loss to each creditor will not be

great, and I hope you will see your way to approve of a compromise on this

Hoping to hear from you by return mail, 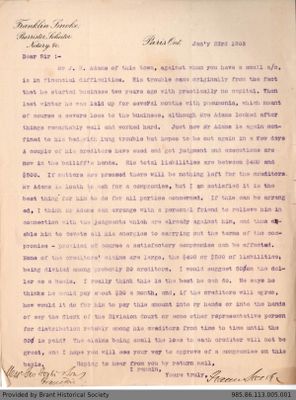