Media Type
Text
Image
Item Types
Documents
Correspondence
Description
The central branch of the County of Brant system is located in Paris, Ontario. In 1999 Paris and its surrounding areas amalgamated to form the County of Brant. Before that time each community was served by its own separate library:

Paris Branch
In 1841 Hiram Capron—founder of Paris, Ontario—and 25 residents formed the Paris Mutual Institute for the purpose of Lectures, Circulating Library, and Scientific experiments. Later that year the name was changed to the Paris Mechanics’ Institute so that the organization could apply for government grants. In 1858 Paris’s first public library was established when a lot located at 7 Grand River St. N. in Paris was purchased from Hiram Capron for $150. The Paris library then expanded after receiving a Carnegie grant in 1902 and the new free public library was located at 12 William Street, Paris. The library remains at this location today. The branch was renovated and expanded again in 1995.

Scotland-Oakland Branch
The Scotland-Oakland branch of the County of Brant Public Library is located at 281 Oakland Road, Scotland, Ontario. The branch has been at its current location since March 2005. Before that time the Scotland library enjoyed a long history in its community: a small library opened its doors to the public in 1894. In 1910 the librarian sold the building to the Scotland Library Trustees for $125; the cost of a library card in 1911 was 50 cents for the first card and 25 cents for the next. By 1938 the library had a home in a white frame building with a town bell on its roof which served as a fire alarm for the residents of Scotland. On October 10, l967 under by-law no. 844 – “To Establish a Township Public Library”, Scotland Library became the Oakland Township Public Library. In 1973 the Oakland Township Library purchased a house which was converted into the library and opened in 1974. Twenty years later the bell from the original building was unveiled to commemorate l00 years of library service in Scotland. When the County of Brant amalgamated in 1999 the Oakland Library joined its system; in 2005 a brand new facility was unveiled with the name Scotland-Oakland Branch.

St. George Branch
The St. George Branch of the County of Brant Public Library was first formed in 1878 as a Mechanics’ Institute and was housed in the back room of their association hall. In 1893 the local newspaper reported that there were 3000 titles in the collection and that over 2300 loans were enacted that year. It moved to new quarters behind the post office in the new century and joined with the Glen Morris library, the only other library in the county, to form the South Dumfries Public Library. The library went into severe decline between the two World Wars, thought to be caused by the Depression, and it took a concerted effort by a number of the towns people to resurrect its collection. Plays were produced in the town\'s Memorial Hall to raise funds for new books. This became a yearly event for some time. St. George and Glen Morris retained that name until the amalgamation of Brant County in 1999; at about this time the branch moved from its old location to its new spot at 78 Main Street North, St. George, Ontario.

Glen Morris Branch
The Glen Morris Branch is located at 474 East River Road, Glen Morris, Ontario. In 1875 a Penny Reading Society was founded in Glen Morris to provide entertainment and education during the long winter months. In February 1888 the funds of the society were transferred to a Mechanics’ Institute. The Institute ran until 1910 when it was changed to a public library under the Provincial Library Act. In 1966 the library in Glen Morris became part of the township library system, then in 1967 joined the newly designed regional system which increased circulation from over 2000 books in 1966 to over 8000 books in 1967. In 1971 the library was renovated by volunteers. In 1999 with the amalgamation of the County of Brant, the Glen Morris Library became part of the County of Brant Public Library.

Burford Branch
Burford had a “public” Library in the 1890s, housed in three rooms above the former Burford Advance newspaper. Membership was $1.50 a year. Magazines and newspapers were displayed, books were imprisoned behind a grilled wicket and readers consulted a catalogue for their choice of books and the librarian (a local dentist) handed them out. Despite the pleas of numerous Library supporters, the Library closed in 1910.

The Women’s Institute reopened the Burford Library in 1914, this version being housed in a local Maple Avenue South home. After the home owner’s death in 1961 the books were put into storage on the top floor of the Baptist Church.

In 1964, a group of Burford residents applied for a Centennial grant which was denied--grants were only given to existing Libraries. In 1966, a temporary board made arrangements to rent the citizens' room above the post office. The Township made the Library “official” by passing a by-law in 1967. In 1971 the Library moved to a free-standing building at 1 King Street which is now 120 King Street. The Library became a member of the South Central Regional Library System which greatly enhanced the service. In 1978 the help of various service organizations, donations from users and Township council, enough monies were raised to apply for a “Wintario” grant. In September 1979 the former owner of the Library building presented the keys to the Board. In 1999 the Burford Library became part of the County system under amalgamation.

The current Burford branch, in a brand new building located at 24 Park Avenue, Burford, Ontario, opened its doors in 2007. It is the county’s second largest branch at almost 6,000 sq. feet.

References
Smith, Donald. (1982). At the Forks of the Grand: 20 Historical Essays on Paris, Ontario. Paris, ON: Paris Public Library Board. 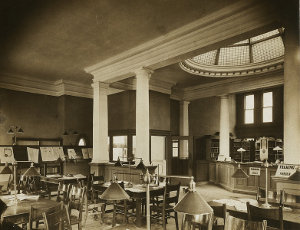