This former schoolhouse is located at 322 Burford-Delhi Road, Burford, Ontario on Lot 16, Concession 14. It was built in the 1930's as a trustees school for the townships of Burford and Windsor. The land grant was provided for the school in 1937 for $100.80. The building has three bedrooms, a kitchen, bathroom, living room and an attic. With a stone foundation, the schoolhouse was built from wood, tin and brick vinyl. In 1961, a grant was made to local residents Edward and Miriam Chamberlain for access to the Schoolhouse's well for $1. The School had also purchased land being the building for use as a baseball diamond. During the 1960s, the wood stove was removed and replaced with oil heating. In 1983, the bell from the schoolhouse roof was stolen. After the school closed down, the building was rented out for a while before being currently used for storage.

Thomas Powell received a patent for 200 acres of land on Lot 16, Concession 14 from the Crown.

James Oswald and his wife agree to a division involving three-quarters of an acre of the plot's West half to Melinda Chamberlain.

James Oswald and his wife agree to a division of half an acre of Lot 16 with John William Smith.

James Oswald and his wife fulfill an agreement over to 54 and 1/2 acres of land for $90 to Charles Hedgers from 1852.

Melinda Clarke Chamberlain makes a bill of sale for part of the Western half of Lot 16 to Aaron H. Chamberlain for $100.

John William Smith and his wife agree to a bill of sale of half an acre of Lot 16 to (presumably) their son Joseph Allen Smith for $25. The instrument of sale was initially dated in 1870.

Sodema Smith, the devisee for Joseph Allen Smith, makes a bill of sale of half an acre of Lot 16 to Aaron H. Chamberlain for $25.

1916 – Bill of Sale to Hattie Chamberlain

Aaron H. Chamberlain agrees to a bill of sale for an undeclared amount of land on Lot 16 to his daughter-in-law Hattie E.M. Chamberlain, married to his son Charles Hedgers Chamberlain, for $75.2

Melinda Chamberlain, Eliza Hedgers and Aaron H. Chamberlain agree to a bill of sale for part of the Western half of Lot 16 to their son Charles H. Chamberlain and their daughter-in-law Hattie Chamberlain for $1.00. They are guaranteed use of this land until they designate the next owner.

1917 – Bill of Sale to Hattie Chamberlain

Charles H. Chamberlain agrees to a bill of sale regarding part of the Western half of Lot 16 for $1 to his mother Melinda Chamberlain and Eliza Hedgers. This agreement helps to secure their position as joint tenants and guarantee their position for the remainder of their lives.

Agreement made between William Crosby Davidson and George White and Sons Co. Ltd. Over 150 acres is agreed upon for unknown reasons.

1936 – Grant to Melvin and Gwendolyn Barnes

Clarence J. Barnes and his wife provide a grant to Melvin J. Barnes and his wife Gwendolyn E. Barnes for $1, which includes 54 and a half acres of the Western half of Lot 16 as joint tenants. “Reserving to the Grantor and his said wife the use and control of the said premises for their use and control during their natural lives and the survivor of them also what is known as the West Barn as now upon said premises.”

1937 – Grant to Residents and Trustees School

William C. Davidson and his wife May Davidson agree to grant part of their land on Lot 16 to Orville Davidson, Charles Chamberlain, Clarence J Barnes and the Trustees School, Section #20 and #13 in Township of Burford and Windsor, for $100.80.

Grant made from the Burford Township District School Board and William C. Davidson to Edward Chamberlain & his wife Miriam Chamberlain, involving the South-Western part of Lot 16 as joint tenants. 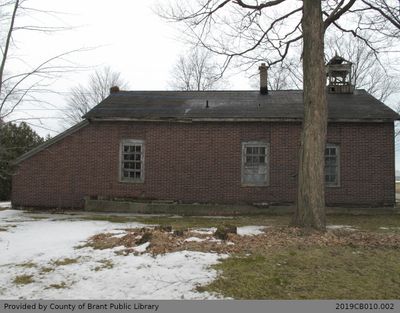