Gentlemen, I have you in reference to

my note held by you. I thought when I [spoke]

to you about it in the fall that I would

be able to let you have [part] when I

sold my hogs. By the time I got there ready

the price went down and I did not [receive]

to their sixty or eighty dollars what I

expected. I had my seat and [taxes] to make

all of which had to be paid out of this

money as I lost my wheat crop entirely and

it placed me in a bad position. It was

just my [ex] year on the place and

I did not have enough to start clean, so it

has been very close work with me, at one

time. I had almost decided to give up

time. I did not know the reason until I

received your letter. But it appears to

me as an [intervention] of Providence as it

has given me a chance to arrange [illegible]

business and get in shape for another

craft. [Prospects] are good the wheat and

[clour] have wintered splendidly I have

thirty acres of [magnificent] wheat and

[of] it [illegible] as good as it [provinces] now

I will be able to [illegible] my rely of all [indebting]

during next winter. If you would kindly

[arrange] to hold the note until after

harvest I would make it one of the first

payments. I would not ask it but I have

nothing that I can realise on with any

degree of certainty until the first settlement.

I spoke to Mr. [Saxman] about it and explained

to him and I think he will be [surley]

to [end] as before. Have a talk with him and

with me again. Yours truly, C. H. Birley. 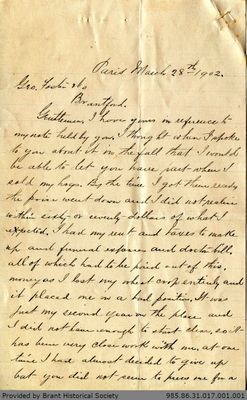 Reverse Side of Letter
Groups of Related Records