St. Paul’s Anglican Church is a rare surviving example of a board-and-batten church in Ontario. Located in Middleport, it was built upon land donated by Robert Wade, the owner of the Middleport General Store. Constructed in 1868, the church has a Gothic steeple with paired lancet windows. The lower level of the church has single lancet windows with stained glass2. The rear of the church has three stained glass windows over the alter, a joint gift from Robert Racey and Reverend Adam Elliott in memory of Adam Elliott’s nephew and niece. A monument dedicated to the church’s patron Robert Wade is found upon the grounds1. Today, the church is used only on special occasions.

1863 – Church Society of the [Diocese?] of Huron Receives Land

The Church Society of the [Diocese?] of Huron receives land in the will Robert Wade as a “burying ground” unless it should be requested for use for other church purposes4

1880 – Church is Consecrated by Isaac Hellmuth, Bishop of Huron3

1968 - Exterior of Church is Repainted

1968 - Interior of Church is Redecorated

Using money supplied by the Ladies Guild, the interior of the church is redecorated4

This Gothic Revival church conforms to many of the principles of eschatological design and includes a separate nave, lower and narrower chancel, a vestry to the north of the chancel and a west tower surmounted by a spire. The Gothic steeple features paired lancet windows. Pointed arches are used throughout and the triple lancet windows in the east wall of the chancel, and the single lancets in the nave, are filled with stained glass3. The memorial window in the chancel were a joint gift of Robert Racey and Reverend Adam Elliott and erected in memory of Adam Elliott’s nephew and niece1. The side and north windows were a gift of Mr. Cooper of the village of Mount Pleasant3.

The font is located toward the west end of the nave close to the entrance to the church. It is wooden and stands on a tall pedestal. The use of wood finds precedent in medieval England and Wales and the moulded capital and base are similar to those found in the 13th century. Similarly, the lectern with a central column and nail-head ornament between corner shafts and sunk quatrefoils on the plinth and the front of the lectern is Early English in style3. 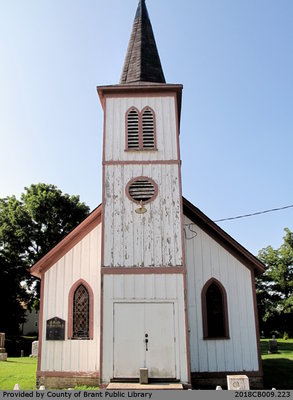