The Bryce home was constructed in 1853 by JR Ellis for the Scottish blacksmith and wagon maker George Bryce on land located in Mount Pleasant. Though it has been modified throughout the years, including a raised roof in a different style than the original and now missing the original verandah, it still contains aspects of the original home3.

On March 5th, an order is placed by George Bryce to JR Ellis to build a house for the sum of seventy-seven pounds or three hundred and ten dollars to be completed by October of that year2

1902 – Property is Included in George Bryce’s Probate of Will

On February 8th 48 acres of land, including the house, is listed as part of George Bryce’s will. The executors are Peter Bryce, Alexander Bryce and Margaret Bryce4

Margaret Bryce is granted 2 acres of land including the house, likely as a part of her inheritance4

On October 22nd Gordon L. Duncan purchases the property from Margaret B. Young (formerly Bryce). He also enters into a mortgage agreement with Margaret Young for $18004

On September 1st Thomas W. and Betty B. Bannister purchase the property from Ida Davies4

The Bryce family was from Perthshire, Scotland. George Bryce was a blacksmith and wagon maker who came to Mount Pleasant in 1843 at the age of 25 with his wife Catherine Henderson, age 22. George and Catherine joined the local United Presbyterian congregation and had seven children: George Jr., Peter, John, Eliza, Robert, Alexander and Margaret3.

The original brick house was built in Regency style in 1853. The original dimensions were 28 by 40 feet with 12 foot high walls and constructed in red stretcher bond brick2. A difference in brick texture and hue suggest a second storey addition was added at later date. The main house now stands at two storeys with an irregular plan and two rear wings. The red clapboard rear wing is a part of the original farmhouse1.The house also possesses a smaller rear white addition. The roof is now cross gable with gambrel sides. The eaves are projecting verges with frieze and the raking is cornice boxed with triangular return. Brick chimneys were previously located side left and side right on the exterior and were presumably connected to the house’s two fireplaces. The front door is centered in the main façade and has a flat structural opening. The door’s surround head has moulded trim with red brick arch radiating voussoirs. The architrave side panels are flush lights and the transom is light mullion. The main house was originally built with eleven windows, each of them 10 x 14 glass except for those upstairs2. They are double huge 4x4 panel windows with shutters and arch radiating voussoirs. The back window on the second storey addition is single hung. All posterior windows lack shutters. The house previously featured a 6 x 40 foot verandah2 which has since been removed1. 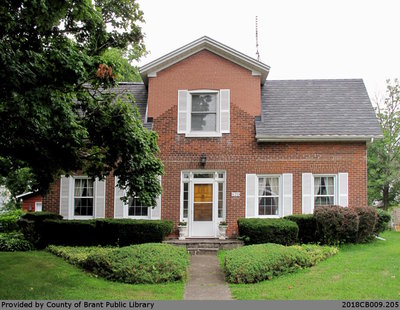