Located in Paris, this house features Classical design elements and likely operated as a farm house before the area’s residential development. A back addition was added at some point during the house’s history but eventually collapsed3.

1866 – Daniel O’Neil is granted all of said lot by John Smith, Sherriff1

Leonard A. Sovereign et. Al purchases property from Mary A. Cousin for $6001

c. 2011 – Back addition to house disintegrates3

Leonard A. Sovereign was born in the County of Norfolk, Ontario on the 29th of December 1825. He was the son of William and Diana (Bloomfield) Sovereign. His father was a farmer born in Pennsylvania on March 28th 1791 and died March 12 1868 and his mother was born in Genessee County N.Y. on December 23rd 1791 and died January 2nd 1867. William settled in Norfolk County in 1799. William and Diana were married on April 25th 1819. William, Diana and eventually Leonard remained in Norfolk until 1834 until they moved to Brant County for the remainder of their lives. Leonard came to Paris in 1876. Like his father, he worked as a farmer for most of his life, was a Justice of the Peace and filed the office of Councillor for South Dumfries. He had three brothers and four sisters: Horace, Jeremiah, David, Levina, Mary, Eliza and Jane2. He died on December 29th 1825.

This house is a two storey building with several Classical-style details constructed from grey header bond brick. The posterior of the building features white shingle upon gable while the front gable has been updated to clean planking. The building has a natural stone foundation and a rectangular layout. The side facing porch and door detailing suggest the house was initially built to face away from the street3. The roof is a medium gable with a center gable on the porch side. The single chimney is offset right center constructed from concrete blocks. The eaves are cornice boxed plain, a common feature of Classical architecture, with cornice boxed plain without frieze raking. The current front door is located off-centre on the gable façade with a flat structural opening and plain trim surround. It is a single leaf one panel light door. The porch entrance door, which likely operated as the front door in the home’s past, features arched radiating voussoir. The front façade windows are single hung with decorative glass panel and brick arched radiating voussoir on first floor. The left face features single panel picture windows. The posterior face has two single hung windows without decorative panelling and differing sizes. The right face features single hung windows with decorative panel and brick arched radiating voussoirs on both first floor and dormer. The home has a side facing porch with natural stone columns and railings. 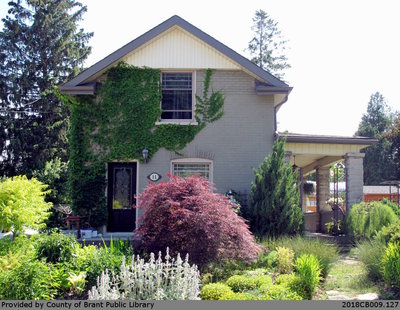