1869 – The Trustees of the Methodist Church are granted ¾ acres of land by A.W. Ellis

The United Church Manse is a symmetrical two storey building constructed in plain Georgian style out of buff common bond brick. Designed by prominent Brantford architect John Turner, it repeats some of the architectural details of the United Church, also designed by Turner and built in 18632. The manse has a T-shaped plan with a rear wing addition and features quoins on the corners of the main house. The main house possesses decorative scrolling hood molds over double hung four-by-four windows. There is a single picture window on the right side of the house flush with the exterior chimney. The roof is a low gable with an offset right centered chimney and a second concrete block offset right exterior chimney. The eaves are projecting cornice with fascia alone and the raking is cornice boxed plain with return and without frieze. The main door is centered in the main façade with flat opening and molded trim head and surround. The door’s architrave is flush light side panel and flush light mullion. The front porch features brick columns with a solid wood balustrade. A roof railing creates upper floor balcony. The upper level main façade door is a single panel light and has a decorative hood mould. The house has a posterior single storey white clapboard addition. The addition features two-by-two glass block window and three-by-three glass block window on the posterior. 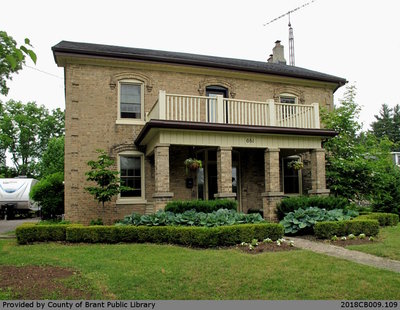