The former Onondaga School is a Romanesque Revival schoolhouse designed by renowned architect John Turner and constructed in 18743. The building was originally School Section #5 and when it was first constructed it cost around $3000 and housed over 200 students4. It has a tall steeple with symmetrical sides of large pointed Gothic windows. The roof line of the steeple has dentil brick work and double cornice brackets while the roof of the building is gable. In 1975 the Onondaga Municipal Office was housed in this building. The building then became home to the County of Brant Service Area Office and the Onondaga Fire Department until it was demolished in the summer of 2018. A cairn celebrating the six school sections and featuring a bell from one of the rural schools sits outside2.

1854 – Elizabeth Thomas is granted the land

On July 12th Elizabeth [Hume?], listed as the wife of WM [Hume?], is granted 1/5 acres of land from Elizabeth Thomas1

1949 – School is granted to the Municipal School Board

On February 16th the Municipal School Board is granted 1/5 acres of land, including school, by Johnston A. [Walker?]1

This Romanesque Revival style schoolhouse was built in 1874. It is a single storey rectangular plan building with a posterior concrete block addition. It was constructed out of buff header bond brick with decorative accents such as projecting stringcourses and brick pilasters. The building has a tall steeple with symmetrical sides of large pointed Gothic windows. The roofline of the steeple has dentil brick work and double cornice brackets. The roof of the main building is a high gable metal roof with posterior offset left and right single brick chimneys. It has projecting eaves with no rafters exposed and plain projecting verges. The main door is centered in the main façade with a center pointed opening, label surround and a center pointed transom. Left and right side windows are fixed arch with arched egress windows in the basement. Single hung windows are found in the addition. A cairn celebrating the six school sections is found outside the main building. A school bell from one of the rural schools sits on top of the cairn. 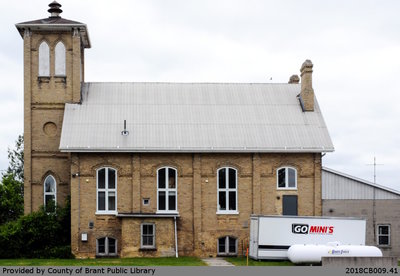