This one and a half storey yellow brick Ontario farmhouse was built circa 1870, suggesting either William or Elijah Harrison may have been responsible for building it. The roof possesses a steep pitch with front and side gables. The brickwork suggests that the windows were previously arched before they were replaced.

Land granted on June 12th by the Crown; part of Lots 42 and 43 of River Lot (also referred to as River Range)1

Land purchased from George H.M. Johnson on December 27th; Henry G. Riddle took out a mortgage from Johnson for £200.001

Land purchased on March 11th from Henry G. Riddle and his wife; Elliot took out a mortgage for £300.00 on April 15th1

Mortgage released on May 26th1

Land purchased November 29th from Adam Elliot and his wife. Mary Ann may have been the widow of Henry G. Riddle1

Mortgage released on May 14th1

Part of William Harrison’s property left to his family as part of probate; March 6th1

Land purchased from Elijah Harrison and his wife for $200.00 on April 5th1

1893 – Elijah Harrison and his wife take out mortgage

On June 25th, Marshall Dawson purchased ½ acres for $200.00, with the grantors listed as Maria Riddle and Belle Dawson, Marshall’s wife. An additional note of “Belle Riddle – individually and as guardians of her eight children, and ______ and Belle Dawson ______ John Riddle” is made. It is unclear whether Belle is related to the Riddles, but she may have been a daughter1

On May 11th, Frederick Harrison purchased this land from Elijah Harrison for what appears to be $1.001

On May 11th, Elijah and Frederick Harrison and the latter’s wife take took out a mortgage from Mary Anna Harriot Brook (David Brook’s widow) for $2200.001

Mortgage corresponding to the $4000.00 mortgage Harrison took out from David Brook which had been partially released in 1906 now fully released on May 14th1

1915 – Jacob Miller and wife take out a mortgage

On June 16th, there was a transaction between Standard Natural Gas Co. Ltd and John [Carmody?], possibly the former purchasing the 60 acres John [Carmody?] had purchased from Frederick Harrison in 19101

1926 – Jacob Miller takes out a mortgage

Frederick Harrison granted an easement to the Hydro Electrical Power [Company of Brant?] for the amount of $84.40 on September 4th1

1953 – Transaction between Everett Harrison and Minta A. Harrison, and Frederick Harrison

The nature of this transaction is unknown due to smudging on the document, but Everett Harrison and Minta A. Harrison either bought or were granted 58 acres from Frederick Harrison on February 11th1

On February 16th, a transaction for 63 acres involving the estate of Frederick Harrison took place, though the nature of this transaction is illegible1

This transaction on January 21st appears to have been a _____ certificate applying to the Estate of Jacob Miller, for the ½ acres in Lot 43 Miller had purchased from Samuel Simpson in 19081

The Queen granted this land, noted as Lot 43, to Edward and Blanche Dougherty on August 21st for the amount of $1.00. The document has additional notes for this transaction but they are illegible1

1961 – Easement granted to the Hydro Electric Power [Company of Brant]?

Edward and Blanche Dougherty grant the Hydro Electric Power [Company of Brant]? an easement for the amount of $534.71 on November 1st1

Three parcels of Lot 43 granted Marth 30th by Edward and Blanche Dougherty for $1.001

This is a one and a half storey house built circa 1870 with an L-shaped plan and constructed of yellow header bond brick. It also features brown decorative air bricks featuring four crossed circles. The roof features an offset gable. The house has two chimneys, one on the exterior left and constructed of concrete block and the other in exterior back right constructed of red brick. The differing materials suggest that both chimneys are not original to the house. There are wooden projecting eaves with no rafters exposed painted dark green and the roof features plain projecting verges. The front door is off-centre main in the main façade featuring arch radiating voussoirs at the head and a plain dark green wood surround. The windows were previously arched but now are mainly single-hung with half-round plain dark green wood surround with protruding apron and also feature arch radiating voussoirs. There is a smaller square window in matching half-round dark green wood surround on left side of the building. A vertical plank single story wood addition on is found on back left with picture slider window. A thick line of dark visible mortar suggests on the rear half of building suggests that the second floor may be a newer addition to the house. On the main façade, there is a verandah with decorative posts and brackets and a scalloped trim. 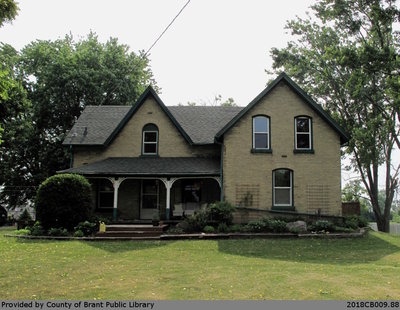