This property is located in the former South Dumfries Township near the village of Harrisburg. The Clarke Family lived upon the property for 50 years or more. The land was owned by Mullen in the 1840s and he presumably built the original log cabin.6 The house was eventually upgraded to stone during the Crimean War (1853-56). The war was a boon to Canadian farmers since the British banned the purchase of Russian wheat and bought Canadian wheat at considerably higher prices and quantities. By 1855 the property was owned by Simon Smith Sr. who had divided up the land between 3 of his sons. The property where the house is located was given to Simon Smith Jr. In 1900 an addition was added to the property. At some point there was a full garden in the backyard. By 1921 the house had been divided up into 3 sections and housed 3 different families. The house’s shutters were removed and burned as kindling during the Great Depression. By 1967 the house was operating as a Bed and Breakfast.

The house was believed to have been built by Mullen who owned the property at that time.6

The Smith family several plots east of Harrisburg. Smith Sr. likely divided up the land to leave to his sons. The elder sons built houses on the South side of the road.5

Simon Smith Jr. inherited the plot of land where house is located. This action is assumed to be tied to either the son's marriage or the father's retirement. 5

1970s - Brick removed from summer kitchen and replaced with siding

Ernest Shuert (1883-1966) inhabited the property with his wife Elsie (Greenfield) Shuert (1877-1927), children Orval and Alvin, his father Henary and mother Elizabeth. His occupation was listed as farmer4

Andrew Allen (1888-1967) lived on the property with his wife Iva (d.1980), his children Harry, Beatrice, Clifford, Jean, and Herbert and labourer Russel Hill. His occupation was listed as farmer4

John Guminiak and his family, including his wife Jennie, children Frank, Verna, Josie, Millie, Julian, Joseph, Edward and John’s brother George Guminiak lived upon the property. Like the heads of the other families who lived in the divided house, his occupation was listed as farmer4

The original section of Smith Place has a symmetrical design with a combination Georgian and neo-classical style. The straight lined roof and positioning of the chimneys are remnant of colonial Georgian style. However, neo-classical influence can be seen in the turned eaves, slightly arched windows and the inset front door. It possesses a 1 ½ storey main house with a single story wood shed/garage and 2 story extension. The house was constructed in header bond brick in cream/yellow buff with quoins on the corners and on the seam between additions. The house is three bricks thick on the main floor and two bricks thick on the upper floor. The stone foundation is twenty inches thick. Brown brick is found on the wood shed/garage main façade with white wood clapboard surrounding. An enclosed small porch creates an entryway to the shed which also possesses a single centered chimney in brick. The summer kitchen and wood shed/garage are just connected on the corner. Residents have to go outside for access. The roof of the main house is done in white fascia with trim and a Greek revival frieze with cornice return. The roof shape is low side gable with a single centered chimney and another single chimney by the main entrance, both done in brick. The original chimney to the west was moved and another chimney added to the right of the front door. The brick wall was cut into in order to erect this new chimney. The more elaborate design and lack of stone base suggest this chimney was of a later date than the initial construction of the house. The front door is centered in the main façade and features Grecian-style moulded trim, recessed side light panels and a recessed light mullion transom. The upper floor windows are Georgian in style and symmetrical. They provide light for the two bedrooms, left and right, while the middle window provides lighting for the upstairs landing. The windows all swing on top hinges. The lower windows were originally designed with twelve panes (six upper and six lower.) The windows feature flush decorative brick in a radial pattern. Inside, the basic plan of the house is four square rooms on the first and upper floors with a center staircase and a box hall at the entrance. The house possesses a full basement with a large six by ten foot cistern and fieldstone walls and four hewn one foot joints under the main floor. The basement stairs are original to the house. It also features split-lath beneath the plaster.6 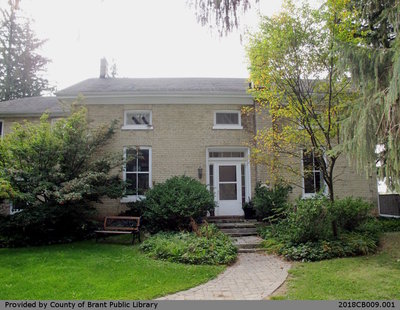