Media Type
Image
Text
Item Type
Documents
Description
A document of summons and declaration addressed to the sheriff of Gore district dated the thirtieth of December 1837 in the case of James Luck vs. John Owles and John Langs in what appears to be over the matter of an unpaid sum of forty pounds.
Inscriptions
Upper Canada Gore District [illegible]

Victoria by the Grace of God of the United Kingdom of Great Britain and Ireland, Queen, Defender of the Faith

To the Sheriff of the Gore District greeting

We command you that you summon John Owles and John Langs of your district, to appear either in person or by their attorney at our district Court, to be [holden?] in the town of Hamilton, in the paid district, on Saturday the thirty first day of March to answer the complaint of – James Luck, of a plea of debt on recognizance. For that whereas the said defund debts, heretofore [towit?], on the seventeenth day of July in the tear of Our Lord one thousand eighteen hundred and thirty five [towit?] at Hamilton, in the said district, give before one John Miller, then and there being a commissioner duly appointed and empowered to take recognizances in and for the Gore District, [then?] and there, to wit, on [illegible]day and year last aforeward, to wit, at Hamilton aforesaid before the said John Miller, so being such [commissions?] as aforesaid, became pledge and bail for one John Miller and then and there did [j-illegible] and [severally?] undertake that if it should happen that the said John Miller should be convicted of the suit office said plaintiff (in a certain plea of trespass on the ease upon [illegible] dowage of the said plaintiff of Forty ------- pounds then de[illegible] in their honorable [illegible] by and at the suit of the said plaintiff ----- against the said John Miller he the said John Miller should sa[illegible] by the [costs?] and [condsumation?] money, of [illegible] [fines?] [illegible] custody of the Sheriff of the Gore District, or they the said defendant would do for him; which said recognizance, aforeward took on the seventeenth ------ day of July aforesaid in the year aforesaid towit, at Hamilton aforesaid, in the Gore District, was duly [transmitted?] by the said John Miller so being [work?] commissioner as aforesaid [illegible]

[3]
So to do have not as yet paid the said sum of thirty pounds, fourteen shillings, and four pence have demanded or any part thereof to the said plaintiff. [But?] they to do this have hitherto wholly refused, and [illegible] do refuse to the damages of the said plaintiff of Forty ------------- and therefore [illegible]

Witness [Miles?] O’Reilly Esquire [illegible] Our Gore District [Fourth?] this [thirtieth?] day of December, in the year of Our Lord one thousand eight hundred and thirty seven, and in the [illegible]

Date of Original
December 30, 1837
Subject(s)
Documents
Local identifier
2017NL001.22
Collection
Langs Family Personal Collection
Language of Item
English
Copyright Statement
Copyright status unknown. Responsibility for determining the copyright status and any use rests exclusively with the user.
Recommended Citation
Summons and Declaration: Luck vs. Owles & Langs, 30 December 1837. Langs Family Personal Collection, Item No. 2017NL001.22
Terms of Use
The information and images provided are for personal research only and are not to be used for commercial purposes. Use of this information should include the credit "Provided by the Langs Family"
Contact
County of Brant Public Library
Email
WWW address
http://www.brantlibrary.ca/
Agency street/mail address
County of Brant Public Library (Paris Branch)
12 William Street
Paris, ON
N3L 1K7 | @brantlibrary 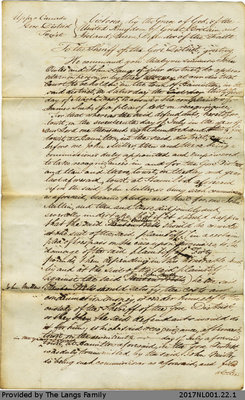