The Langs' Home, also known as Nut Grove Farm, has been in the Langs family for many generations. The original house was a log house until it burned down in 1845. By the following year, a 1.5 storey home was built in its place. Black walnut and hickory nut trees have always been on the farm, thus the name Nut Grove farm.1

Lease agreement was for 999 years and cost 118 pounds and 18 shillings, and a token gift of a dunghill fowl if requested by the Indians

Purchased for 1400 pounds, 989 years with a token gift of a peppercorn if requested

At this time, the cost of land per acre was 1 pound

Several wells had been dug throughout the years to supply enough water for the livestock.

1928 - Kitchen roof was raised to the same height1

The entire house was stuccoed white.

c.1930s - English paper-shelled walnuts and filberts were introduced to the property1

Having injured his back due to a fall on ice, Randall was unable to farm for a living. From 1958 and on, he was employed by Agriculture Canada as an ROP inspector (Record of Performance). The farm was leased by Greenlife Proteins LTD, a company run by his first cousins, Elton and Merle Papple, and the land was seeded with alfalfa most years.

1947 - Horses had been used for farm work; however a tractor was purchased on this year – a Farmall model H1

c.1950s - The farm was used as a quarantine station for Sussex cattle imported from England, destined for Kansas, Texas, and Florida. These cattle were accompanied by their herdsman, Fred Eastwood, who lived with the family1

The well for drinking water was refurbished at this time with a pressure pump to the kitchen and bathroom. The kitchen was renovated with the addition of a mudroom, laundry room and toilet for downstairs use.

1965 - A combine used for custom work was purchased1

c.1990 - Foundation to barn was upgraded from stone to cement and modern materials1

Nelson was a farmer who was born in 1827 in this home. He is the son of John and grandson of Jacob Langs, who was one of the first settlers of Northumberland County, Pennsylvania. He has always resided in his birth home until he married Eliza Sands in 1854. He eventually owned 130 acres of land, near Langford, and had four children: Martine, Susan, Ella and Flint. He passed away February 15, 1900 at the age of 73. His wife, Eliza, passed away on March 7, 1909 at the age of 81.1

He was born in 1881. All real estate from his father, John Langs, was left to Edwin Ruthven Langs until he passed away in 1898 which the property then descended to Edwin Randall Langs. He passed away in October 22, 1945 after a fall from a ladder which resulted in his death within a couple of hours. He left the farm to his wife, Winnie, until his children reached the age of 25 in which case the land is to be divided between the three of them: Edwin Hugh Langs, Randall D Langs, and Murray P Langs. Edwin and his wife Winnie resided together on the property since 1910. 1

Owned the property in 1945 until his death in 1983. He was married to Laura Elvira Langs. He injured his back from a fall and was unable to farm for a living. From 1958 onwards, he was a Record Of Performance Inspector. The farm was leased to a company run by his first cousins and the land was seeded by Alfalfa most years. After the death of Randall, Laura Langs gave the farm to her second son, John Earl Langs in 1986.The farm was sold to John and Nadine Langs in 1996.1

He was born in Buffalo Valley, Pennsylvania in 1759. One of the first settlers of Northumberland County, Pennsylvania. In 1807 he moved to Canada and purchased a large plot of land (lot 9)– mostly covered with forest from Allen Sage. He went through many hardships to convert the forest into productive fields. He had a total of 8 children with Elizabeth Fowler. The other members of his family arrived in 1810 or shortly after. He resided on Lot 9 until his death in 1840. He gave 50 acres to his daughter, Sydney, and lived there until she died. 45 Acres was given to Nelson when he married in 1854.1

This vernacular style home was built circa 1846 after the original home was burnt down. The front part of the home features a single window pane door with a small 2 column porch. It has two 3 pane windows, one 2-pane double hung windows, and one small paned window at the top. It has an off-centre gable façade. The left-hand side of the front has a covered verandah with four large two-pane windows. The top features a door and a double hung window. The left hand side features an addition with one 2-pane 6-grid window, one 6-grid window, and a door. It also has two single pane windows. The back side features three large 3-pane windows and one large two-pane window. It features two brick chimneys on either side of the home. The basement is original fieldstone. 1 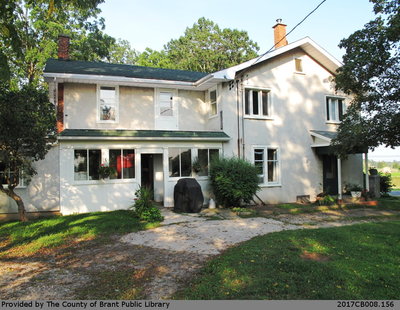