The Garden Wall, located on Oakland Road, Scotland, was built in 1802 by Finlay Malcolm. After a few changes in ownership, the home is now back in the Malcolm family. This home has a rich history with its connections to the 1837 Rebellion and was one of the first homes in its area. 3

1802 - Finlay I Malcolm took out a patent for his home which is two miles west of Oakland at the brow of the hill as you enter the village.6

There existed a natural grove at the north of his property. At the time lots sold for $50.00. He built his home in 1802. By now, Findlay and Tryphenia had a growing family of six sons and four daughters. At the end of their procreation, they had 10 sons and 5 daughters.

???? - Finlay planted a large orchard across the street which extended down the hill to where the old wooden mill was located6

The orchard was still producing in 1870.

???? - Back kitchen added on to accommodate growing family3

Eliakin, James and Isaac Malcolm were the local organizers who actively assisted Dr. Duncombe and we involved in the recruiting efforts.

???? - There were rumours that a tunnel system ran through the basement4

William Mackenzie and other rebels hid there. These rumours started when they were smoked out of the home and only had one place to go – upstairs. However, when the raiders went downstairs to capture them, they were not there. The scorch marks in the basement are said to still be visible.

???? - Basement tunnel entrance was bricked up2

1878 - Due to poor financial planning, Eliakim Jr. Malcolm lost the home. No Malcolm’s lived in the home again until 20011

The building, located beside garden wall, housed the southern Ontario telephone company and a law office at various times. The bell on the roof, a gift to the library from the Womens institute, rang three times daily.

Raised chickens and toy Manchester dogs and fancy fowl. Mr. Smith won many prizes with his entries at fall fairs and the Canadian National Exhibition.

???? - Mr. Smith built a small two storey house next to his home for the dogs. People were interested in renting the house out.5

???? - The rosewood mantelpiece over the fireplace in the living room was made from the wood of the first piano owned in the community6

???? - Ardent gardeners, Mr. and Mrs. Smith planted trees, shrubs, and flowers around the house and grounds making a place of beauty of the spring that ran through the property. Thus giving it the popular name “The Garden Wall”6

???? - Mr. and Mrs. Smith cut down large walnut tree in the front yard and sold wood. Gave the money to their grandchildren5

???? - Ron Ellis purchased the home and rented it out2

2001 - Dean and Jean Ann Taylor purchased the home from Ron Ellis (who was selling privately) but did not reside in the home.3

Professor Dean Ann Taylor is a descendent of the Malcolms.

Finlay was born in 1750 in Aberdeenshire, Scotland. In 1769, Finlay lived in Penobscot, Maine; Duncan (father) and Findlay had properties on lots 88 and 87 in the northern bay area of the Village of Penobscot. Findlay met and eventually married Tryphenia Wardwell, daughter of Captain Daniel Wardwell of York, Maine. In 1783, Findlay dismantled his wood frame house, numbered the components, and with his wife, Tryphenia and family loaded all on one of his ships. He was concerned that his sons might take to his seafaring ways; this fear spurred him to leave the east coast and move to richer lands and greater opportunities in Upper Canada. It is documented that Findlay liquidated several lands and businesses. While travelling along the St. Lawrence River, his sixth son, Duncan was born during the summer of 1798.After arriving in Burlington, Ontario and travelling overland, he reached what is now known as Oakland. Findlay took out a patent for his home which is two miles west of Oakland. He built his home in 1802. By now, Findlay and Tryphenia had a growing family of six sons and four daughters. Two eldest sons, John and Findlay, had Oakland farms and on their pond they developed a grist mill. This began a rich enterprise which eventually extended into five mills along the Oakland and Scotland creek. Because of this development, the area became known as “Malcolm Mills” before it was renamed Scotland, Ontario. Findlay's homestead established the Village of Scotland which overlooked the valley to the east. He established a farm here and a large fruit orchard south of the homestead. Settlers for miles around bought from his fruit farm, which eventually included a large cider mill. Then Tryphenia gave birth to fifteen children. The family now had support from the children to clear the land, work the farm, operate the mills, and work on other aspects of pioneer life. 3 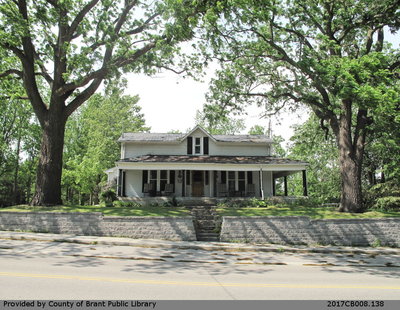