This house on Arnold Street, thought to be Charles Arnold’s first home, is a 2377 square feet stucco home with a cobblestone foundation. Charles Arnold purchased the land from Hiram Capron and built the storey and a half lathe plaster home. It was stuccoed in 1965. A lot of renovations have taken place throughout the years, but the original home is still captured perfectly.1

1912 - Mrs Postill and her 5 children moved here after the death of Mr. Postill in a farming accident1

1953 - Fern Rook applied for a building permit so that he could make repairs to the stucco and garage at an estimated cost of $500.001

It was a brown stucco building with a green roof. Inside the floors were solid pine. The house was a rental property for several years until the 1980s.

House was run down with the plumbing and furnace not working. Debbie saw its potential and purchased the home.

They were made by Debbie.

???? - Wall lighting added in between living room and dining room1

In order to do this, Claude had to remove the entire wall and doorway and uncovered a brick hearth. The exposed brick wall divides the two main rooms which are illuminated by boxed in potlighting at the ceiling where the old door used to be.

Born December 17, 1818 in Bedfordshire, England. Emigrated to Paris, Ontario with his family when he was 14 years old. He apprenticed to Asa Wolverton to learn carpentry. In 1844, he married Agnes Taylor when he was 26 years old. Arnold started his own nursery and registered a mortgage on Lot 2 in 1852. He had four children – Amelia, George, Charles and Susan. He was one of the first Councillors when Paris was incorporated as a village. Agnes Arnold passed away in 1854 and he remarried in 1855 to Margaret Shackleton and had two children, Ella and Ida. In 1884, Charles dies at 64 years due to an enlarged heart. His son, George, continued the nursery business.1

Mrs. Adams earned a diploma in A.T.C.M to teach music but did not pursue a career in the field since she married Mr. Adams in 1930 and started their poultry business and nursery. Two fires ended that venture. She was a member of the Paris Lady Lions for many years and was a member of St. Paul’s United Church for many years. Mr. Adams was a photographer who became interested in pollination by bees. He took a course at the University of Guelph in Horticulture and then continued pollination studies at Waterloo University. He co-wrote a book called “Atlas of Pollen of the Trees and Shrubs of Eastern Canada and the Adjacent United States.”1

This detached two-storey stucco home with 2377 square feet is said to have been built sometime in the 1840s. It originally had seven rooms with it eventually having 10 rooms by 1948. The basement features the original cobblestone foundation and it was believed that the basement was once the kitchen; during a renovation the remains of a beehive oven were uncovered. It features the original front door and transom. The original pine floors are upstairs with 80% red pine planking with some boards as wide as 18 inches in what had been the servant’s quarters. It has a monochromatic colour scheme and central chimney. The vernacular house blended with classical and picturesque elements, are capable of existing by the tudor labels over the windows, the modest portico, and the returning eaves that cut sharply back into the side walls. The lower storey has eight over twelve paned windows and 25 rows of cobblestone.1 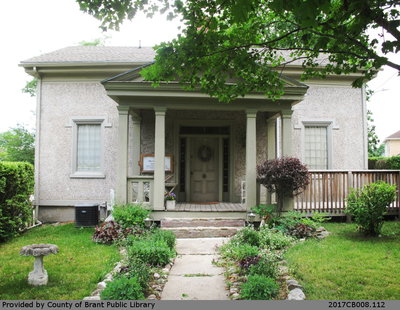