This Georgian-revival structure built circa 1848 can be found in the small town of Mount Pleasant; it was constructed on lot 9 and part of lot 8. This property used to be 414 acres originally granted to William Sturgis. Eventually 100 acres was sold to Alvah Townsend, thus the creation of a lovely 2 storey home. It now stands restored on a 1 acre property. Throughout the years there have been many different owners and many upgrades.1

???? - Kitchen door bricked up and turned into window1

Alvah Townsend was a carriage maker and blacksmith Alvah Townsend. Townsend had come to Mount Pleasant from New York State with his wife, Sarah Jane Deviney who was originally from Ireland. A prominent businessman and active member of the local Methodist church, in 1848 Townsend commissioned the same Hamilton builders to construct an impressive Georgian mansion for his family in keeping with his social position. Alvah Townsend needed such a sizeable house to accommodate his growing family of eventually 8 children. In 1851, 46 year old Alvah and 40 year old Sarah had seven children ranging from 18 down to 2. By the time of the 1871 census Alvah and Sarah continued to live in the magnificent home, along with six of their grown children ranging from 17 to 33. Eventually he sold the home to Duncan Marquis for $10-12,000 in 1883. Alvah passed away in 1884.3

Duncan Marquis was born in Argyleshire, Scotland on December 5, 1842. After graduating from Victoria Medical College in 1865, Dr. Marquis set up a practice in Mount Pleasant. On May 11, 1870, he married Elizabeth Bryce. Dr. Marquis had a flourishing practice, attracting patients from the city of Brantford and from the surrounding districts. In 1883, as a sign of the prosperity of his medical practice and his place in the community, Duncan purchased the mansion of Alvah Townsend to the north of the village for $12,000. In 1888 Dr. Duncan’s reputation earned him an appointment to serve at the Ontario School for the Blind in Brantford. However, illness precluded him from accepting the position but his son John who had followed in his father’s medical footsteps substituted for him. That same year Duncan and Elizabeth located to Brantford, leaving behind the Georgian mansion “Marquis Hall” that had been the scene of great family occasions, if only for a short time. They lived together until 1850, when his death severed their union. 2 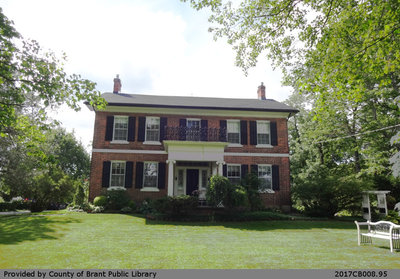