It was built on land given by pioneer Edward Vanderlip. On May 4th, the building committee was appointed and included John Day and Samuel Westbrook. $770 was made available for this project.

Service was at 10 am and was conducted by Reverend H.F. Bland of Dundas. In the afternoon, Reverend C.Freshman of Galt spoke. In the evening, Reverend Joel Briggs from Welland spoke. On all three sermons, the church was filled to capacity. The collections made totaled to $40.33.

1871 - Union of Methodist Churches was contemplated1

1872 - In May, the Union of Methodist churches was voted on and Plank Road Church became known as Langford Wesleyan Methodist Church.

It was to be used as Sunday school rooms and dining hall.

1949 - The church windows were re-glazed with amber cathedral glass1

1950 - The entire inside of the church was painted, the walls and ceiling tinted1

1953 - 85th anniversary celebration on September 13 with Reverend A.F. Gardner in the morning and Reverend H.W. Strapp in the evening1

1956 - On December 9th, a fire broke out in Sunday School at the rear of the church shortly before 2 PM service was to start1

The room containing the furnace and kitchen equipment was gutted. Some people removed the piano, carpet and some furnishings. The main church was saved by Brantford's fire department but was On damaged by smoke. Total damage was estimated at $7000.00. The fire was believed to have been started from the furnace which sat on a cement slab on the ground and came up through a space in the floor boards. One particular item lost was a mural that had been painted by Ernie Duce Sr. On December 13, the first meeting was held to discuss redecorating and rebuilding.

May 12th was the first service in the newly renovated sanctuary just 5 months after the fire; it was a special Mother's Day service. June 2nd was the official re-opening service. The new Sunday School hall and kitchen were built by Thomas Williams. In November, there was a large gathering at the dedication service for the new Sunday School hall. Chairman of the building committee, Walter Madden, thanked: builder Thomas Williams for an attractive building, Albert Olmstead for bulldozing, C.Stemmler for bricklaying, Jim Simpson for electric wiring, Feelys Hardware for the heating unit, Marvin Ireland for eavestrough, Sam Berrisford for wooden beams, George Musikov for plastering, Jack Devereaux for tilling, Alton Misner for building plans, Alex Hunter for gravel, Elm Avenue United Church for light fixtures, Langford Young People group for draperies, and Jean Cairns for painting of Christ.

1958- Nov 2nd was the 90th anniversary celebration of the church1

$1000 debt still owing for building of church hall from fire.

New buff vinyl asbestos tile floor has been laid in the hall by Brant United Floor Craft of Brantford. Finances were provided by the Women’s Association. Aug 10 – Mr. Thomas Williams began work on the new building at the east end of hall to contain a kitchen and two washrooms.

1962 – Church ceiling was insulated. Mr. Ellis Chant painted a picture of the Lord's supper for the hall1

1962 - On April 7, Mrs. E.R Langs was honoured by congregation and friends of Langford Church attended by 140 people – she was church treasurer for 33 years and retired at the end of 19611

1964 – Baptismal font, pulpit and communion table were donated through the estate of Harry Westbrook- dedicated the furniture in his memory1

Silver bread trays for the communion set were also donated through a gift of money in memory of Peter Cairns. In June, renovations were made to the church worship centre including plastering of the arch, removal of part of the front railing and making of new centre steps. On December, the final payment on the kitchen building fund was finally made thus retiring the debt.

Congregational dinner was held in March to celebrate the retirement of debt on church kitchen. 97th church anniversary held on June 13. Also in June, new kitchen cupboards were installed at cost of $754.37. On October 13, a public meeting was held in the old Brant school with township officials regarding request to purchase property at the rear of the church for parking from Mr. Howard Schneider. On November 26, a downpayment of $300 was made to the Schneiders in process of annexation.

In March a church library had been started. A cooler had been purchased by the UCW and installed, and a vacuum cleaner was donated. Fire Insurance renewed for $36,000. Final payment on the newly-annexed property was made and a new deed was prepared.

1967 – On February, inside of hall was painted, woodwork varnished and new curtains hung by UCW1

In June, ornamental shrubs were planted at the front of the church. On September, men of the church erected a wooden fence along the east side of the church property. Materials were donated by Mr. W Madden Sr and Mr. W Madden Jr. On December, new front doors with crash hardware were placed on church by Mr. Schneider.

In February, a stained glass window (gift from Myers family) was installed above new doors by Gordon Durnford and W Madden Jr. Last week of February, interior walls and ceiling of church were painted a warm beige colour by Mr W Wandermout of Brantford. Following this, the woodwork, pews and organ were woodgrained. During first two weeks of May, Mr. Vandermout also painted exterior trim of church and hall. May 4, fundraising aunction was held to help with cost of renos and redecorating. Approximately $2000 was raised. During last week of May, blue wall to wall carpet was laid on the floor and platform of the church. Early in June, the brickwork and foundation of the church were repaired by Mr. E Chant. A stone cairn was erected by Mr W Madden Jr and Mr G Durnford on the north-west corner of the church grounds to honour the founders of the church. The bronze plaque there on, donated by Kostuk family, bears the inscription : “LANGFORD UNITED CHURCH 1868-1968. This cairn erected to commemorate our 100th anniversary by the congregation June 9 1968.” On June 9, the 100 anniversary services commenced. In October, an agreement was made with Mr H Schneider to supply hard water to the church. A pipeline was connected from his home to the church lines. The cistern in the basement was leaking and causing much dampness. In December, a new coat rack has been made by MR, Ellis Chant and placed at rear of church.

1970 – Auction was held to augment funds as supporters were declining1

1973 - Pictures of families and groups within the Cainsville and Langford churches were being taken for the preparation of a church directory. 105th anniversary of the church on June 101

1977 - New organ was bought for church. On May 28, a barn dance was held in new barn of Tom Alderson, sponsored by church community1

1978 - Celebration service was held on February 12 for the retirement of debt on organ and dedication of new red hymn books purchased by UCW. In October, a new sign was made for the church by Norm Baulcomb, Brantford, from cedar from bush on property of McCann family1

1979- Church yard sale held on May 26. November 3, insulation put in over church ceiling1

1981- Storm windows were installed by Stevens Aluminium sales of Cainsville1

1984- Langford will pay 1/3 and Cainsville will pay 2/3 of mutual charge expenses. In March, the interior of the hall has been redecorated and new curtains hung1

In June 23, a special service was held at Cainsville Community Centre to celebrate 60 years of the formation of the United Church of Canada. In October, a new roof was put on the church by Styres Lumber, Oshweken. In December, the minister had bought a computer for his office to assist in his sermons and storing reference material. Reverend Mark Steinacher had a welcome dinner in November. In the Fall, Bob Davis and his crew made preparations and repairs at the manse for the new minister. New counter top and sink, painting of dining and living rooms, three new storm doors, cementing garage floor, cleaning up of basement and removing dead trees and trimming bushes in yard.

1986 - New pictures of members of Langford church for photo directory1

1986 - Church concerns made this year have been: inclusive language, sexual orientation and ordination of homosexuals as ministers1

New stained glass windows were installed – diamond shaped pieces of cream and gold coloured catherdral glass.Windows were designed by university student Scott Archer, and were manufactured and installed by Sun Lite Glass at a cost of $9,921.28.

1989-1992 - Roof was redone on the Sunday School Room, Kitchen and Nursery. Two new furnances were installed, hot water tank was installed and electrical rewiring was done1

1991 - On November 27, Erie Presbytery approved the transference of the property known as Langford United Church, to the Congregation/Trustees of The Langford Community Church subject to terms1

1992 - On February 16, the motion for Langford church was defeated at the Hamilton Conference regarding the transference approval stated above1

Reverend John Forester, Erie Presbytery representative, made a motion that the United Church should not accept anything less than $100,000 for the Langford Church and property since it was valued at $200,000. Things were looking grim for the church as the Hamilton Conference has placed value of money over morals. In November, Erie Presbytery sent a letter to the Langford Community Church stating “It is with great pleasure that I write this letter informing you that we have received a positive reply from Hamilton Conference concerning Langford Church Property. The following motion was passed by the Sub-Executive of Hamilton Conference: The Langford United Church facilities to be sold to the Langford Community Church for the sum of two dollars ($2.00), plus an additional six hundred dollars ($600.00) to cover costs of the transaction. This agreement be subject to a reversionary clause such that should the Langford Community Church ever cease to exist or decide to dispose of the property that it be required to offer it to the United Church of Canada for the sum of two dollars ($2.00)."

1993 - Langford Church, after a few years of negotiations and losses, successfully won the battle to separate from the United Church of Canada thus becoming Langford Community Church. The celebration of its acquisition was an afternoon service of worship and deed transfer on February 281

1996 - Roof was changed to membrane roof. Existing steel was removed. It was said to have life expectancy of about 25 years with 10 year guarantee. Church sign changed to digital1

2008 - New sanctuary doors, a new furnace for sanctuary added, new air conditioning for the hall and the refurbishing of the nursery and washrooms. Sanctuary interior painted, new furnace for hall and cushions for the pews. New stairs to the sanctuary platform with carpet installed1

2012 - Lightbulbs in nursery and downstairs Sunday School were changed to energy efficient ones. All windows were caulked1

2013 - New bookkeeping software implemented. Brick of the church was repointed. Part of the chimney was taken down 3 or 4 layers.1 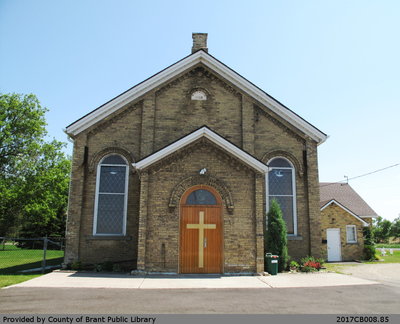