The Koustall House, located on Bishopsgate Road, is an award-winning Georgian-Style home recognized by the Architectural Conservatory of Ontario. Built in 1870, it is the area’s most architecturally significant homes featuring six-over-six panes and an elaborate porch with gingerbread scroll.2

19?? - Addition added to the northeast side of house.1

It is an entry way and laundry room.

This five-bay Georgian styled home, built in 1870, features 5 six over six sash double hung windows on the top floor and 4 six over six sash double hung windows on the bottom floor with a single window door and rectangular side lights. The top windows have green shutters that match the colour scheme of the rest of the house. All the windows feature soldier course brick work. The brick is laid out in a Flemish bond pattern. It is a centre door main façade with decorative paired brackets attached to the roof. The verandah features beautifully decorated white gingerbread scrolls and 9 white posts. The right side of the house features 4 paired brackets under the roof. It has three six over six sash double hung windows with slip sills, green shutters, and soldier course brick work. There is also a door which may have been a large window or larger door in the past as there is some mismatched brick that showcases that something had been replaced. There is a small simple sash sliding window between the door and green shuttered blind window on the lower floor. The back right-hand side has an addition built into it made out of light-coloured wood. It is an enclosed porch. It features large single pane windows. The back of the house has been added on at a later date. It features a door with triangular brick work and two single pane windows with soldier course brick work. There is also a chimney in the back. In the back left-hand side, there is another wooden addition with simple sash windows, a 6 grid windowed door, and a chimney. The left-hand side features 3 six over six sash double hung windows with slip sills but this time it does not feature the green shutters. It also has soldier course brick work and paired brackets on the roof. The basement windows also have soldier course brick work. Similar to the right side, there seems to have been a door here that has been bricked up. The soldier course brick work still remains above the mismatched brick. There are four bedrooms, one bathroom and a kitchen upstairs and three bedrooms on the main floor. The house features the original windows, original front door, and original fieldstone basement. There are floor coverings over the original floors. There are also two non-working fireplaces. This award winning home is a sight to see. 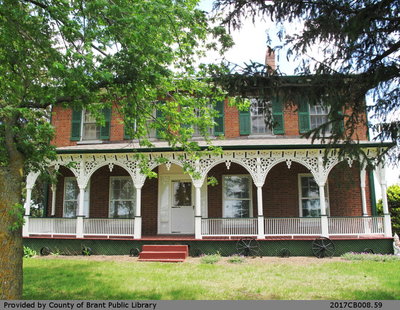