This property on McBay Road, also known as Clover Hill Stables, is one of the oldest in the area. It is believed to have belonged to the Westbrooks, who were early settlers in the area. This home has been very modified due to its age – the original being built circa 1860. When this house was built there was only one other house between Cainsville and Dundas which were stagecoach stops.1

The land was eventually split into three and given to other Westbrook family members.

???? - Large porch out front was removed and never replaced 1

Born July 9th 1798. The first son of Major John Westbrook and Elizabeth Gage took up over 500 acres of Crown Land in Brantford Township, which is a part of Brant County, upon which he remained until his death. John Westbrook and his brother were captured and were taken care of by Joseph Brant. Once released, they told their parents about the area and how much they loved it there, everyone picked up and migrated to the area. John Westbrook settled on Fairchild’s Creek and was one of the first settlers in Brantford. Andrew married Mary Diamond and had several children. His children took up the land after his death. It was divided into three ways: Fred and Harry Westbrook, Alfred and Balsora Westbrook, and Dolly Westbrook. The home under question belonged to Fred and Harry Westbrook until it was sold in 1947.2

This pale yellow façade house has a centered entrance and was built circa 1860. It features a medium gable roof with two gable dormers with an overhang; the dormers were added later on. The top floor new windows are split in half to create two panes containing a gridded mullion pattern. The door is situated in a three side bay with an overhang, sidelights and an arched transom. The main floor windows are operable and are divided into three sections. The front used to have an enclosed porch but it was taken down after a renovation took place. There is one fireplace on either side of the house. The right side of the house has a one storey addition. It features various windows such as a 12 lite side by side paned window, a 9 lite side by side window, on the main portion of the house is a 24 paned lite window with transom and a 15 lite operable. The chimney’s brick is laid out in a header bond pattern. The back right hand side features another addition with a simple sash window and white shutters. The back features a beautiful large bay window, sliding door and 4 sash window with mullions. There are also two small simple sash windows on the top floor and a side single windowed door. The left hand side features large 2 sash windows with mullion on either side of the chimney. The top floor has two simple sash windows on either side of the chimney. The chimney is aluminum unlike the bricked chimney on the opposite side of the home. There is a nice stone pathway up towards the house. This home was originally vernacular using local builders and supplies to build it. The construction was post and beam held together with Oak pins. The outside was clapboard covering wide boards on 2X8 uprights; the clapboard has now been covered with siding. At the time, there was also no insulation. The nails were handmade and all pine floors and beams were hand hewn. The beams were as long as 40 feet and likely over one foot square. The walls were made of lathe-slats and plaster. The half basement was made of brick as was the floor. The brick was made and found on the farm. There used to be a five seat outhouse at the back of the house with 3 adult stations and 2 stations for children. Today the existing house is the similar size as the original except dormers have been added. This house has been beautifully updated with large windows throughout the home and aluminum siding.1 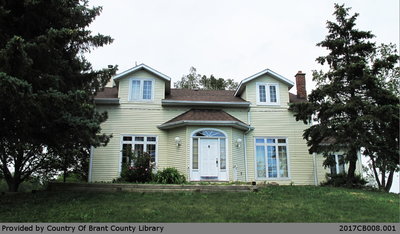