Creators
Jones, Margaret, Author
Pate, Andrew; Pate, Mary
, Recipient
Media Type
Object
Text
Item Type
Correspondence
Description
Handwritten letter in blue ink by Margaret Jones to Andrew Wilson Pate, her second cousin, and his wife Mary H. Pate. After settling her boys, Barry aged six and Stewart aged eight, with the Pate family at Brantwood Farms, Margaret describes her return trip to England, crossing the ocean the Britain with the last merchant ship convoy that took private passengers.
Notes
The Pate-Jones Collection consists of some photographs of the family members and a large group of letters. The majority of the letters are written by Margaret nee Wilson, and some by her husband Howard Jones, to their sons Barry and Stewart Jones, or to Mr. and Mrs. Pate. From 1940 to 1945 during the Second World War, Barry and Stewart lived with Margaret’s second cousin Andrew Wilson Pate and his wife Mary Herron nee McClure at the Brantwood Farm. The original farm was founded by Andrew’s father James Pate, and was situated on the south side of Powerline Road and Gretzky Parkway, which at that time, was considered part of the County of Brant.

In recent decades, the original Brantwood Farm that was situated on the south side of Powerline Road was sold by the Pate family for development. The farms are now located on the north side of Powerline Road, and consist of several farms belonging to several Pate families, mostly within the County of Brant, remaining a thriving local establishment to this day.
Inscriptions
Netherfield
Landsdowne Ave.
Oaken
Wolverhampton
20th July ' 40

My Dear Mr. and Mrs. Pate,
It is now a whole week since your letters arrived - - your charming wonder letters!! - - why I have delayed so long in writing I can't explain - - probably because there is so much and yet so little to say! - so much on ...shall I call it the emotional side, but I'm too Scotch to express it! - - so much on the practical side and yet so little that is definite!
Yes! No matter how our plans work out - your generous response so willingly expressed will be something to remember for all times! - Our thanks and appreciation are difficult to convey - - almost impossible, so as this is not a time for words perhaps I'd better leave it at just "Thank you" in the meantime.
Now about arrangements this end - I shall not weary you with

[page 2]
the story of contradictory orders - - wasted forms - - the sudden remake of plans etc. Etc.- - you can just guess that all movements to and from this country are very indefinite. The only definite fact I can tell you is that the plans are in hand for Barry, Stewart and Malcolm Ferrier to come accompanied by me. - - If, in the first place, I had seen it is my duty to accompany them, we should have sailed last week, but it has been a struggle to come to that decision. I won't say I have arrived at it under pressure - - that would not be true. - but Howard, Daddy, and Mr. And Mrs. Ferrier (Jean, of course) are delighted and relieved! I might just mention that the one fact that has helped to convince me that I'm maybe not "running away"...and has curbed my desire to "Go To IT", is that I know that I have not fully recovered from the operation I had last year. I'm absolutely well and feel grand but I have to put the brake on in time to avoid any trouble.
Of course I'll get back here as soon as I see the boys settled and I hope I shall be a real help. I

[page 3]
am not coming on a pleasure trip and surely it will be easier for you if I'm there to help in the strangeness of new surroundings. -
Obviously I need not write at any length about the boys under this new arrangement, but as you are probably deciding about the "billeting" I feel that I ought to say just a little.
Well firstly I must answer your question of Barry and Stewart staying together. Actually, the fact that I am willing to leave all such arrangements to you- - and also agree that the burden must be made as light as possible...answers that question. I ought to say that they get on very well together (which does not always follow in a family) although they are so different!
It would be better for everyone if Stewart was where there is another child (or children). Barry will be contented anywhere - he is a very easy child to manage and yet being so sensitive needs sympathetic handling (I'm afraid he's going to miss his Daddy who is wonderful with him). Stewart is not made in such a fine grain as Barry but is really more attractive. Both are very obedient.

[page 4]
In any case I supposed they’ll be fairly near each other and I am bringing their bicycles.
Now Malcolm is a fine lad - - a great big chap (9 ½) – very bright - - very strong personality - - - He was a very wild difficult child but has responded to his school training and is a pleasure to have about now! The very fact that he is at Boarding School has made him very adaptable and he will settle down anywhere - - he has knocked about too much to be affected for long. He is actually staying with me now on holiday so having 3 together makes them a bit of a handful especially as I don’t like but curb Malcolm too much as he is on holiday. – I might just say that he is not enough older than my 2 boys to be tolerant and of course he doesn’t understand Barry. Perhaps the best way I can put it is that Barry has no guile at all.
I suppose that all that remains to be said now is that I shall cable you form the ship when and if we are ever on it… I shall get in touch with my 2 young girl cousins –

[page 5]
you may know of them – Linton the name, whose parents are both dead) to meet us in Toronto in passing through and will communicate with you again from there. –
The money restriction was rather a blow but my husband is wiring to you some suggestions on that point. We are allowed £10 per head and I suppose there will be one or 2 things they’ll need for winter which are unprocurable here. I am doing my best to rig them out.
And now yes, I must confess it – I am looking forward to seeing you all!--- We have set our faces in a certain direction and now we dare not look back. If I waver at all it will only be in secret. I hope you are all well. – All our family are fine and Daddy is very very busy. I hardly ever see Howard, he is so busy and we are just a bit weary with uncertain nights. – All meantime then –
Yours very sincerely
Margaret (Jones)
P. S. it was a change to have letters written on only one side of the paper as yours. Paper is rationed here!
Date Of Event
20 July 1940
Subject(s)
Second World War
Local identifier
2017AM001
Language of Item
English
Geographic Coverage
Donor
E. Ann McRae
Recommended Citation
Letter, Margaret Jones to Andrew and Mary Pate, 20 July 1940, E. Ann McRae. 2017AM001.011.
Terms of Use
The information and images provided are for personal research only and are not to be used for commercial purposes. Use of this information should include the credit "County of Brant Public Library."
Contact
County of Brant Public Library
Email
WWW address
http://www.brantlibrary.ca/
Agency street/mail address
County of Brant Public Library (Paris Branch)
12 William Street
Paris, ON
N3L 1K7 | @brantlibrary 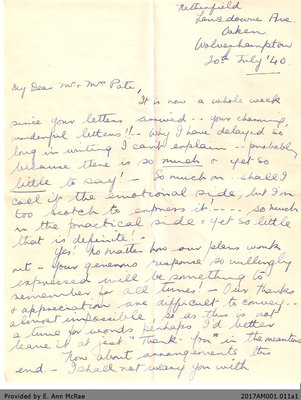