Media Type
Object
Text
Description
2017LL001.005: A four page paper air mail dated 20 July 1944. This copy was kept by Leslie Lamb on 30 July 1944 when they were distributing the papers around Le Mans, France. It is an Allied forces pamphlet that was produced in London, England, written in French, and was air dropped to German occupied areas of France and Belgium by the Royal Air Force. Such pamphlets updated the local people of the ongoing war effort, and provided advice on how to survive in occupied cities. For example, Leslie recalls a paper informing people not to listen to the radio in their homes, because the Germans were known to use radar to determine what frequencies where being listened to, and if families were caught tuning into Allied broadcasts, they would be killed.
Notes
Leslie Lamb was born on 26 January 1925 in Saint Helens, Lancashire, England to Daniel and Annie (Gilleeney) Lamb. They family lived on Marshalls Cross Road, and Leslie attended school around the corner at Robins Lane School. From the age of fifteen to eighteen, he served in the local cadets, and studied Morse code and took radio courses, knowing they would be useful skills. Almost immediately upon his high school graduation at the age of eighteen, Les enlisted as a private in the Royal Air Force (RAF). When he took his RAF entrance exams to determine his proficiency at Morse code, he impressed his instructors by receiving messages at 22 to 23 words per minute, when a pass was only 18 words a minute. Leslie recalls his instructor, Watts, telling him he sent Morse code faster and more accurately than himself and other instructors at the training centre, and due to his proficiency, Les helped train other new recruits despite his young age.

In November or December 1942, he was given his service number, and was temporarily assigned to an Operational Training Unit. Leslie recalls reporting for duty in early 1943 at the Lord’s Cricket Grounds in London, England, and then going to the London Zoo with the other new military recruits, and was provided a meal next to the monkeys. He was then assigned to the Bomber Command 158 Squadron based out of RAF Station Lissett in East Yorkshire, England. He was certified as a wireless operator, and also trained as an air gunner as a reserve. His crew consisted of Keith McKenzie Anderson (pilot), Harry Lomas (navigator), Dennis Till (rear gunner), and George Tuohy (mid upper gunner). He is the only surviving member of the crew. Often flying in a four-engine Handley Page Halifax, they carried out missions across Europe, predominantly over Germany, until the end of the Second World War. The crew’s last active mission during the war was performed on 25 April 1945 in the Halifax nicknamed Friday the 13th, which completed 128 missions in total, the most of any bomber during the war. See a few pages of Leslie’s log book (2017LL001.017) for examples of his missions. Leslie remembers after the conclusion of the war, Bomber Command was tasked with dumping the large stockpiles of bombs in the North Sea. The crew had some fun by flying low, approaching boats on the side, and flying upwards at the last moment, creating large waves to the annoyance of the fishermen. On every mission he took part in, Leslie wore a brown silk scarf with cream-coloured polka dots, and still has the scarf today.

Following the Second World War, Leslie remained in the RAF, and was transferred to Transport Command in either May or June 1945 until 1947. Carrying out passenger flights, he said he appreciated when other aircrew members volunteered to serve the passengers food and drink, preferring to work the machines. At the time of his discharge from the RAF, he was a Warrant Officer. For his military service, he was awarded the 1939-45 Star, France & Germany Star, Defence Medal, War Medal, Normandy Medal, and Bomber Command Medal.

His father Daniel had served in the Lancashire Army and fought for England during the First World War, and was part of the action at the Battle of Passchendaele. Les had two older brothers, Donald (middle child) and William “Bill” (eldest), and all Lamb children saw action in the Second World War. Donald served with the Royal Navy in the Pacific Theatre working on a destroyer. Bill served with the Royal Air Force, and was stationed in North Africa. Due to the air raids and danger in England, Bill could never take leave to return home for five years. Bill was a Corporal, and his trade was a ground mechanic.

Leslie married Renée Topping (1927-2006) on 6 September 1946. Together, the couple had three children, all of whom were born in England, and are now married and also living with their families in the County of Brant area: Norma Shute, Susan Shewfelt, and Lesley Brown. The family came to Canada with their mother shortly after Leslie came over by boat in the late-1950s to Oakland, Brant, Ontario.

After his military service, Les began a seventy year career in carpentry. He worked as a foreman joiner at William Thornton & Sons Ltd. from 1949-1954, as a joiner with Huyton-With-Roby Urban District Council Architectural and Housing Department from 1954-1956, and then completed an apprenticeship as a joiner at Banner Bros. Ltd. Building Contractors in 1956. He immigrated to Brantford, Ontario, Canada with a job lined up for him at Shultz Construction, where he stayed for the next eleven years as a carpenter. Following, he worked as a Plant Superintendent at Shelving Displays Brantford from 1968-1977, then for a year as a foreman carpenter at Participation House Brantford. As well as working independently for a couple years, Les built factories around Brantford, installed the spire on the St. James Church on Colborne Street in West Brantford, and supplied local universities and companies with furniture and interior equipment.

Leslie is highly involved in the community and is a dedicated Life Member of the South Brant Legion and the Brantford Air Force Club, being an executive member several times with both societies. He has donated money to numerous local efforts including the Oakland Athletics Association after his passion for running, Help a Child Smile, Brant Food for Thought, 2659 Royal Canadian Cadet Corps, Brantford Army Cadets, among others. He also is an active member of the Old Saints Church in Mount Pleasant, and has lived in Scotland, Ontario for the past thirty years. 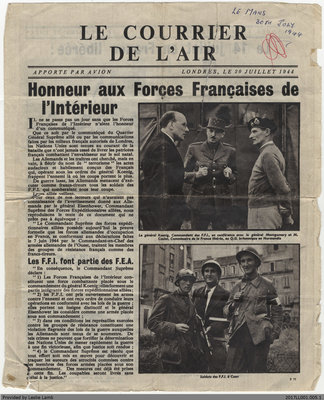