Notes
Joseph “Joe” Bialas was born in 1923 or 1924 to John and Katherine (Serdersky) Bialas. He was the second youngest son, with John Joseph being the eldest son, and Frank the youngest. There were also two daughters in the family, Alice and Mary.

During the Second World War, he served across Canada and England as a Leading Aircraftman on ground crew in the Royal Canadian Air Force.

Following his military service and return to Brantford, he founded Bialas Plumbing and Heating. He joined several service clubs as well as the Brantford Air Force Club and Dunsdon Legion. As well, he diligently attended the Remembrance Day ceremonies at the Brant County War Memorial in Brantford every year.
Inscriptions
June 25 1943
(1)
Dear Mary –
I haven’t got your letter yet but I’m just going to go to the post office now and I hope that money is in that letter of yours if I’ve got one. How is everything at home. We had our tests the other day and when I was interviewed the officer said I was an air gunner so I told him I wouldn’t take it he didn’t like that a bit so now I’m in ground crew and in six months I can remuster for aircrew again but I think I’ll study for aero-mechanic.
How’s daddy’s summer kitchen coming along and has Cardinal’s house coming.

(2)
We’re moving to Roc[kc]liffe Ottawa on Saturday morning but you can write here and they’ll forward it. I’m going to try to get a pass to go home when we get to Ottawa. Boy were we lucky we just missed one flight that went to goose bay Labrador and another to gander bay New Foundland and one to Halifax. Well I’ve got to get going and get my mail now. If I don’t get home this week end it’ll be the next. I tell Mother I’ll write in Ukr[ainian]. the next time I write.
We went to Montreal and [St Hubert?] a couple of nights ago. See you soon give my love to all including the little one.
Brother Joe

(3)
Well sister I thought I was going to Ottawa well today our officer said we leave for Montreal supply depot but I’m still coming home as soon as I can. MacBell has his outfit now but he hasn’t been out yet I talk to him quite a bit. Tell Mother not to worry because when I do get home she won’t recognize me.

(4)
It’s really hot down hear. We got everything ready to leave this place. How’s the baby coming along are everybody petting her up. In a way I’m glad I didn’t take aircrew because we will get more timeoff.
Well it’s time to eat, last night the dessert was ice cream.
Best of luck for you and all
Brother Joe
Date Of Event
25 June 1943
Subject(s)
Military
Royal Canadian Air Force
Second World War
Personal Name(s)
Bialas, Joseph ; Dancavitch, Mary
Local identifier
2017FB001
Language of Item
English
Geographic Coverage
Donor
Frank Bialas
Recommended Citation
Letter, Joseph "Joe" Bialas to Mary Dancavitch, 25 June 1943, Frank Bialas. 2017FB001.039.
Terms of Use
The information and images provided are for personal research only and are not to be used for commercial purposes. Use of this information should include the credit "County of Brant Public Library."
Contact
County of Brant Public Library
Email
WWW address
http://www.brantlibrary.ca/
Agency street/mail address
County of Brant Public Library (Paris Branch)
12 William Street
Paris, ON
N3L 1K7 | @brantlibrary 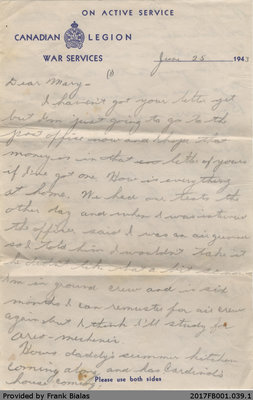